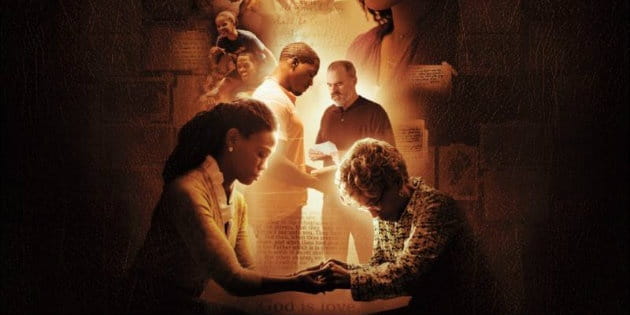 While 2015 might not be “the year of the Bible” all over again, there’s still much and more for Christians to be excited about when it comes to movies. God’s Not Dead 2 is easily the most anticipated film on the faith-based roster, but sadly, that probably won’t reach theaters until sometime next year. In the meantime though, Christian Today has the inside scoop on three upcoming films that should have every believer talking. From an incredible true story of faith and football, to a reminder of how powerful prayer can change lives, here are brief summaries for the must-see Christian films War Room, 90 Minutes in Heaven, and Woodlawn. Czarina Ong writes,

"War Room, which is slated for showing on Aug. 28, is directed by the Kendrick brothers Alex and Stephen, who previously handled movies such as Facing the Giants, Fireproof, and Courageous. Their latest movie tells the story of Tony and Elizabeth Jordan, a couple who seems to have it all—great jobs, a beautiful daughter, and an equally beautiful home. However, behind closed doors, Tony deals with his loss of love for his wife. The two often find themselves fighting each other, with their daughter becoming collateral damage. When Elizabeth meets an elderly widow who teaches her how to fight for her family and set up a secret prayer room in her home, miracles begin to happen.”

“Meanwhile, 90 Minutes in Heaven, which is directed by Michael Polish and stars Hayden Christiensen and Kate Bosworth, tells the true-to-life story of Pastor Don Piper, who suffers from a terrible accident that renders him dead for 90 minutes. He goes to heaven, then returns to earth, and struggles to find purpose in life after that incident. It will be shown on Sept. 11.”

“Lastly, Woodlawn, which has an Oct. 16 release date, travels back to 1973 when the Woodlawn High School football team, including its coach Tandy Gerelds, encounters a spiritual awakening. It is also a real-life story of love and unity during a time when racial discrimination was rampant.”

Two additional films are preparing to debut this fall as well, both of which are expected to contain significant spiritual themes. The first is Captive, an incredible true story of a mother and recovering meth addict who is taken captive in her Atlanta apartment by an armed fugitive. Starring Kate Mara (House of Cards) and David Oyelowo (Selma), this harrowing tale draws deeply from the teachings of Pastor Rick Warren and his book, The Purpose Driven Life. The second is a dramatic retelling of the Chilean miner crisis that took place five years ago, when 33 men became trapped underground after the collapse of the San Jose mine. According to CNN, many of the rescued men attributed their survival to God.

Captive will premier in September alongside 90 Minutes in Heaven, while the Chilean miner’s The 33 is slated to release sometime in November. Though information on these new pictures is still scarce, we can take hope knowing the Gospel message will be heard in theaters around the country. For a Christian viewer, that’s a lot to be thankful for.

Be sure to check out the Crosswalk Movie channel for new reviews every Friday.