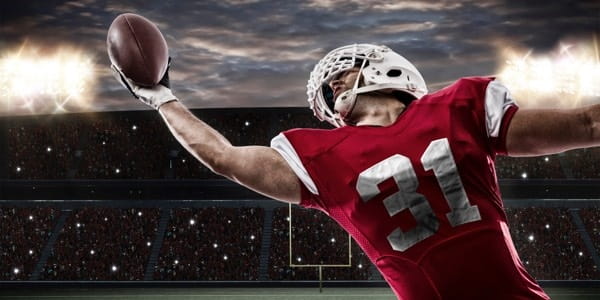 If you’re a football fan, you’ve done it. Fourth quarter, last drive, final timeout, the game comes down to this one last play. You watch and hold your breath as the ball goes in motion. Your favorite quarterback drops back and scans the field to make that perfect, game-winning throw. Defenders fly all over the field and make your stomach knot up.

And when the throw comes, you lean in. You do your best to will the receiver to make the catch. Sure, deep down, you know your vocal coaching through the TV screen has absolutely no impact on the players. You know that you can’t make the ball float right where you want or make the defensive player trip on the turf.

In fact, according to a recent survey by the Public Religion Research Institute, 26% of Americans believe that the game has already been decided. Not by at-home coaches watching on TV, game-fixers in Vegas, or ball-deflators in Foxborough, but by a much… higher power:

Perhaps that explains why so many Christians say they won’t skip church for sports. The same survey found that 45% of white evangelicals would rather be warming the pews than warming the couch, though 32% said they would like to be doing both. (Perhaps they want to be in church just in case it helps with the prayers for the team?)

According to Antonia Blumberg of Huffington Post, this survey jibes with what was discovered right before the 2014 Super Bowl:

“Two weeks before the 2014 Super Bowl, half of American sports fans said they believed God or a supernatural force had a hand in the games they watched, according to a PRRI study at the time.”

Seattle Seakhawks quarterback Russell Wilson may agree with this sentiment as well. In a recent interview, he claimed that God made him throw four interceptions in the NFC championship game so that the results would be more exciting:

“Wilson said, ‘That's God setting it up, to make it so dramatic, so rewarding, so special. I've been through a lot in life, and had some ups and downs. It's what's led me to this day.‘ ”

In his book God and Football, author Chad Gibbs spent some time looking at how football impacts Christians’ faith, particularly in the American South. His results and analysis still resonate:

“When you attend a church here, you will almost certainly hear people talking about football. Worshipers will gather before the service and discuss in reverent tones what went right and wrong the day before. The pastor will usually reference Saturday's happenings by either praising a team's win or mourning its loss, while oftentimes taking a playful dig at the misfortunes of a rival school. Churches sometimes encourage this blending of faith and fanaticism with ‘wear your team's colors’ day or by having viewing parties for big games — with half-time testimonies, naturally.”

So, that brings us to your take. Do you think God intervenes in sports, such as football, or wants a certain team to win? Do you think sports can have an impact on our faith?