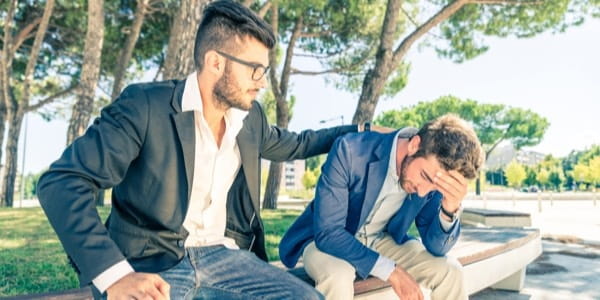 I rejected God because He didn’t fix my life. As a child, I’d begged him to heal the rifts in my family, the yelling matches, the unrelenting tension. Sure, I could have spouted many other, more “reasonable explanations” about why God couldn’t exist, why naturalism could explain everything, and why the Bible couldn’t survive my eviscerating wit. Those gave me cover. But down deep, He just didn’t come through the way I thought He should. Therefore, He couldn’t exist.

The Christians who finally helped me see past the hurt to the love of Christ did not beat me over the head with answers to my questions or the errors of my life. They didn’t need to. I saw Christ in them, and that made all the difference.

“Recovering atheist” and pastor Kile Baker shares a similar story. At one point in his life, he would go to churches to make fun of the sermons and to talk people out of their trust in the Bible. His conversations back then and his interaction with atheists after becoming a Christian have taught him what does and doesn’t work, and he hopes we take some time to consider how we share our faith.

What does he say we get wrong? Five major points:

We are quick to judge their lifestyle, and talk about sin.

“While it’s no secret that God doesn’t want us to sin, if you look at the life of Jesus and the words on His lips, He is overwhelmingly in favor of talking about how much God loves people, rather than their nightlife.”

We minimize a hurt in their life that they expected God to fix.

Most atheists have experienced a time in their lives when they believe that God didn’t come through for them. A family member got sick and wasn’t healed. A relationship fell apart despite their prayers. A church treated them badly. We must not minimize their pain or dismiss it. Instead, we need to take the time to listen to them about it.

We are unprepared to talk about money and the Church.

You shouldn’t be surprised if an atheist brings up the topic of money mismanagement or greed in the church. They’ve seen tons of news stories about this, and they’ll ask you about it. Be prepared to discuss the tithe and its true purpose: “not because He needs our money, but because He cares about where our heart is in relation to it.”

We rush to talk about God, often uninvited.

Baker cites this as the biggest mistake he used to make. He tried to force God into every conversation with his atheist friends. Instead, he says, we must be in relationship with atheists until they have a question. We should pray for God to give us opportunities instead of making them.

We invite them to church, instead of inviting them to our house.

According to Baker, the “church invitation” has taken on very negative connotations. He offers a different approach:

“If you really want to see and hear a great message about God, show them your family life and your hospitality. If you can’t show them God through either of these, than you have no business inviting them to church in the first place.”

Pastor Joe McKeever thinks that most Christians could learn about talking with atheists from an unexpected source—their own past:

“Most of the solid believers I know have considered atheism at one time or other. I did, while in college.  This is not to say I joined the humanist society of Birmingham or majored in skepticism at Birmingham-Southern. But I read some of the stuff, talked to a few of the people, thought about the ramifications of it all, and made my choice to take my stand with believers.

“1) As a rule, atheists tend to be a pretty miserable lot, while the best Christians I know are also the most put-together, positive, and effective people in the room.

“I heard someone say once, ‘The devil has no godly old people.’ Indeed. We could add that the Lord also seems to have all the best-mannered, generous-hearted, goal-oriented achievers. If you look at the product of atheism and Christianity, there is no contest.”

We’d love to hear from you on this topic. How are some ways that we Christians can better interact with atheists? What can we do to share our faith effectively?