Biblical Illiteracy: Choking on Chicken Nuggets When Steak Stands before Us

Biblical Illiteracy: Choking on Chicken Nuggets When Steak Stands before Us 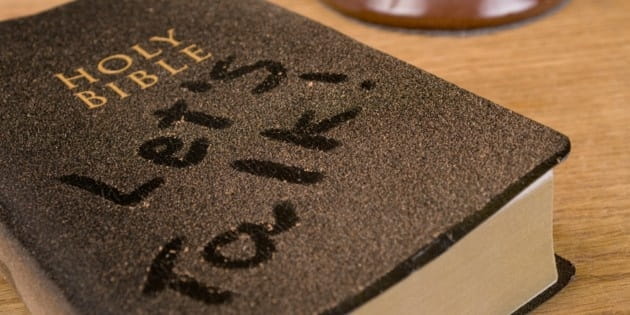 Sometimes, I feel like that dork dad. While the family scarfs down our pizza or green beans or whatever’s on the menu that night, my daughters ask me to “do that question thing” again. (So, before you judge, remember that they ask for it.) Then, between bites of pasta, I shoot out the questions rapid fire:

Dinner time Bible trivia… that’s how we roll. It really wasn’t something I had planned to do, but I can’t say that I’m sorry we do it. In fact, given how low biblical literacy is in America, I realize that it may just be the sort of thing we Christians need. WORLD magazine, in a recent article, laid down the sad stats:

"According to 2014 polls and reports by Barna Group and American Bible Society, 60 percent of Americans can’t name even five of the Ten Commandments. A survey of graduating high-school seniors revealed over 50 percent thought the cities of Sodom and Gomorrah were names of a husband and wife, while another poll indicated that many people believe Jesus’ Sermon on the Mount was preached by Billy Graham."

So, if a few conundrums with our cuisine can help combat this slide, I’m all for it. But that’s just the start. Kenneth Berding, a professor at Biola University, realizes just how huge the problem is. Most Americans’ biblical diet, he says, amounts to nothing more than “chicken nuggets”:

"Berding's concern for biblical literacy began when his interactions with freshman students in his classes every year gave him a startling reality check. Once, while teaching in a New York college, he assigned each student to write a biographical sketch of an Old Testament character and came across the line, 'Joshua was the son of a nun,' in an essay.

" ‘This student clearly didn't know that Nun was the name of Joshua's father, nor apparently did he realize that Catholic nuns weren't around during the time of the Old Testament,' " said Berding. 'But I'm sure it caused quite a stir in the convent.' "

Berding launched the Bible Fluency project with the purpose of combating biblical illiteracy in the church and in the culture at large:

"Our vision is to come alongside churches, Bible societies, schools, and other groups to address head-on a growing epidemic—biblical illiteracy.  We who have worked on this project believe that no one should accept the status quo where people know so little about the Bible they claim to believe.  The fluency program employs high-quality music, visuals, flashcards, workbooks, small group activities, and much more to equip people to recognize and locate the Bible’s 400 most important events, characters, and themes."

Over at BibleStudyTools.com, we work hard to make studying the Bible easy from anywhere. We’ve also featured a number of articles from Dr. Berding as he dives into Scripture and shows how important it is to our lives as believers. In a study on Nehemiah, Berding examined Nehemiah’s prayer life:

"I recently discovered something about Nehemiah that I had never noticed before. There are lots of hints in the biblical book that bears his name that Nehemiah was a person who lived with an ongoing awareness of the presence of the Lord, and who highly valued the importance of communion with God."

Have you seen a decline in biblical literacy among Christians? If so, how do we combat this? What do you do in your own family?