Brian Williams and the Ugly Allure of Embellishing the Truth

Brian Williams and the Ugly Allure of Embellishing the Truth 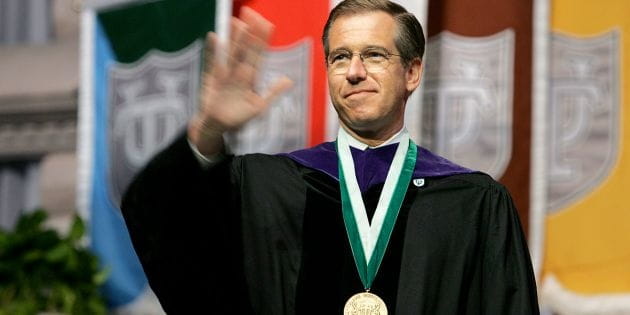 The latest scandal to surface in the American media comes from a somewhat unexpected source: NBC news anchor Brian Williams. The veteran journalist is currently suspended under investigation of falsifying news reports during the Iraq war. Even in a world where deception and lies now seem commonplace, this story has come to many as a shock. Relevant Magazine’s Brian Kammerzelt weighs in on why:

As much as we've become a culture that, in a lot of ways, loves to see our celebrities fall, Brian Williams is different. This is a news anchor and journalist. His one job was to be trusted. We want voices we can depend on in a world that makes it difficult to know who to trust. We need symbols of truth to look to. Not just in our media, but in our daily lives. Williams reminds us that integrity is still looked for and taken seriously.

While many are debating Williams's actions, I'd like to focus on his motivations. He had clearly climbed to the top rung of his professional ladder. His nightly broadcast was the top-rated newscast on television. He achieved rock-star status, hosting Saturday Night Live and appearing on late-night comedy shows. He was trusted by three-fourths of the viewing audience, and was recently ranked one of the most trusted people in America.

Yet his achievements were not enough for him. His exaggerations were an apparent effort to make himself even more historic or heroic. If Brian Williams was the only celebrity to sacrifice personal character for cultural status, I wouldn't be writing this Cultural Commentary. But his story is far from unique.

As in all things, honesty and integrity are qualities Christians seem to wrestle with just as much as our nonreligious counterparts. And tragically, many believers avoid churches and Christian institutions because they fear to encounter lies and moral corruption from trusted leaders. In the Crosswalk.com article 3 Reasons Why Some Christians Avoid Church, John Aloisi writes that two of the reasons are that they have been hurt by a previous church (or church leader), and that the church is full of hypocrites.

Many people have been emotionally torn up by the actions of other people. Churches are full of sinners—hopefully, redeemed sinners, but sinners nonetheless. It should come as no surprise that sinners sin, and although all sin is ultimately against God, human sin often has harmful consequences in the lives of people who have been sinned against.

Just like Brian Williams, the integrity of a Christian (one representing Christ himself) comes with a heavy responsibility. So how can Christians learn from Williams? How can we avoid the mistakes of our fellow Christian (and once trusted leaders), such as Bill Gothard or Mark Driscoll?

First, we must remember that integrity is a battle which doesn’t come easy. Charles Swindoll writes,

In a piece entitled Why Integrity Matters, J. Drew Conley includes a quote exhorting Christians in how to maintain this necessary quality:

"Take heed to thyself. Your own soul is your first and greatest care. . . . Keep a clear conscience through the blood of the Lamb. Keep up close communion with God. Study likeness to Him in all things. Read the Bible for your own growth first, then for your people"…When a man cultivates integrity at the level of the soul, he is ready to take on the challenges of the rest of his life. His integrity holds him to a certain code of conduct, and it shines through even when he is not consciously trying to maintain it.

We all fall; we all sin. But in humility and hard work, we can accept God’s grace and strive to build his “kingdom come, on earth as it is in heaven.” Or, as Swindoll puts it,

You want to shock the world? Start here--demonstrating the guts to do what's right when no one is looking. It takes real guts to stand strong with integrity in a culture weakened by hypocrisy. Start today.