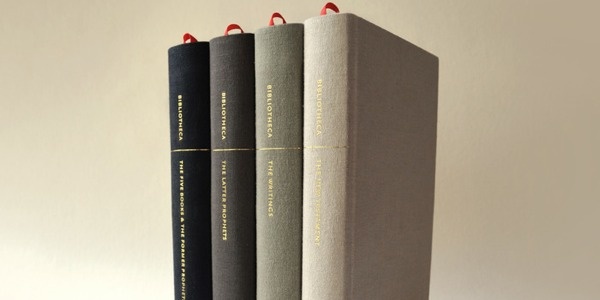 When I think of Kickstarter campaigns, I rarely think of Christian projects. Sure, there are resurrected movies and TV shows, must-have-now gadgets, 80s icons reimagined, and a cornucopia of miscellany. But Christian, buzz-worthy, blow-up-the-Internet projects? Not as often as I’d like.

Then, along came Bibliotheca.

It’s got all the elements that make a notable crowd-sourced project: style, excitement, hype-worthy rewards, and a quality video. But it’s got something more. It’s got God’s Word.

The idea itself isn’t new exactly, but as writer Yasmine Hafiz points out, it’s an idea that certainly resonates with many modern net-dwellers:

“Graphic artist and book designer Adam Lewis Greene has envisioned a Bible without chapters and his idea has found incredible success on the crowd-funding site Kickstarter. He hopes his design will emphasize the role of the Bible as a great literary text by taking away conventions which have been added to increase its usability as a tool for study.

So, what makes this campaign so appealing? And why another Bible? According to Green, part of the problem is that our current Bibles have become so dense and inelegant that they lose the beauty and artistry of Scripture:

“Today, our contemporary bibles are ubiquitously dense, numerical and encyclopedic in format; very different from how we experience other classic & foundational literature, and completely foreign to how the original authors conceived of their work.

“By separating the text into several volumes, and by applying classic & elegant typography, Bibliotheca is meant to provide a fresh alternative to the reader who wants to enjoy the biblical library anew, as great literary art.”

The staff at BibleStudyTools.com certainly agrees that there’s beauty in God’s Word, beauty that we sometimes take for granted. We’ve put together our own videos to help recapture the sense of wonder. Here’s one:

What about you? Are you surprised to see this project take off? Why do you think it’s so popular? Is there another Bible that has this sort of beauty about it?