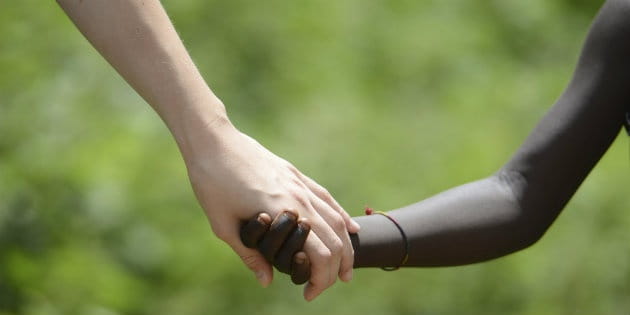 “Remember that time I told you I was a white girl from the South African suburbs who grew up under Apartheid? It means the news the last couple weeks here in America has felt so strangely familiar,” writes Lisa-Jo Baker on her new blog entry about race relations in the U.S.

Although initially reluctant to comment on Ferguson and other recent police shootings, Baker confesses her growing conviction to join the conversation. And the conversation can only go forward, she writes, by loving and listening.

“Jesus was never threatened by the suffering of others. He never felt He needed to justify Himself – He simply went and sat and ate and listened and wept with those who were grieving.

This white girl from South Africa missed the window to be a voice with the weeping during Apartheid.

But she has a blog and voice now in the midst of this terrible aching tear through the fabric of America’s heart this Christmas and I’m compelled to give you my words, friends, with both hands.

So many of us are groaning for understanding because we feel so deeply misunderstood – on every which side of this conversation. And it’s in our nature to want people to see the world our way through our eyes.

But if there’s one thing I’ve learned from South Africa and the leaders who guided us through our own desperate times, it’s that defending your point of view means missing the opportunity to listen. And it’s hard. I grant you. It’s hard to be willing to lay down your own arguments and be willing to listen without agenda or counter-argument.

I grew up a white girl in the most institutionally racist country in the world at the time. And when you’re trying to change, when you’re tired of having people point out all the ways you’re doing it wrong, it’s easy to become defensive. To put up arguments and justifications that build walls and keep neighbors out.

But I am supposed to love my neighbor as myself.”

She goes on to write a simple statement to both her black and white readers who are struggling to be heard and understood in today’s heated climate:

“So to my white friends reading this, can I simply say without judgment, without presuming to know your story – can we simply pause from our own conversations and lay down our point of view in order to listen to someone else’s?

I think this is what love does.

And to my black friends reading this, can I simply say that I’m listening. And I’m aching and I’m heartsick and I’m shaking here on the other side of the screen and I’m making time to deliberately ask the awkward questions to be sure I’m not just listening but actually hearing my black friends.

Because Jesus loves them.”

On Crosswalk.com, Ravi Zacharias draws comparisons between the current environment in America and the violent scene in Ukraine a year ago in From Kiev to Ferguson: Stable Words in an Unstable World. He insists that a country’s laws (whether just or unjust) cannot measure up to the impact and power of the hearts and convictions of a country’s citizens.

“All the platitudes of political double-speak remind us that if we hope in politics and laws we will make the suicidal blunder of thinking that laws change hearts. They do not. Societal laws are always at the mercy of power brokers, as language without integrity of heart lends itself to the machinations of demagogues.

“…But, thank God, there is a law above our laws. There must be a law above our laws that gets to the innermost being of a person and breaks the pursuit of autocracy within. That happens when we admit that the heart must humble itself before God, and this brings change. That surrender of the heart to God disarms the individual and engenders a love from God and for His will.”

“As we look at the Christmas season, we see the love of God at work. He sends and gives His Son so that we might not have to live with mere laws. We hear enough that we are a nation of laws. Laws don't change flaws. They just reveal them. How about becoming a nation of grace? In Him, law and love converge. He brings the work of grace within us to make us hunger after the true, the good, and the beautiful. That rises beyond mere laws. It is not surprising that the Christmas message first came to a simple woman who just wanted to build a home, and then to a carpenter, one working with his hands. It was heralded to a band of shepherds, strangely blending their work, both for the temple and the home. They knew about lambs and sheep. We were the sheep. We awaited a lamb that could be the ultimate sacrifice to bring us to God.”

Our country has a long way to go on the road to racial reconciliation, and Lisa-Jo Baker and Ravi Zacharias believe the first and most crucial step lies within each of our hearts. For more ideas to ponder, read Russell Moore’s Ferguson and the Path to Peace and check out the convicting and interactive Parable of the Polygons.

“He that hath ears to hear, let him hear. A grace-filled Christmas season is my prayer for the streets of Ferguson, the square in Kiev, and indeed, for our troubled world” (Ravi Zacharias, From Kiev to Ferguson: Stable Words in an Unstable World).