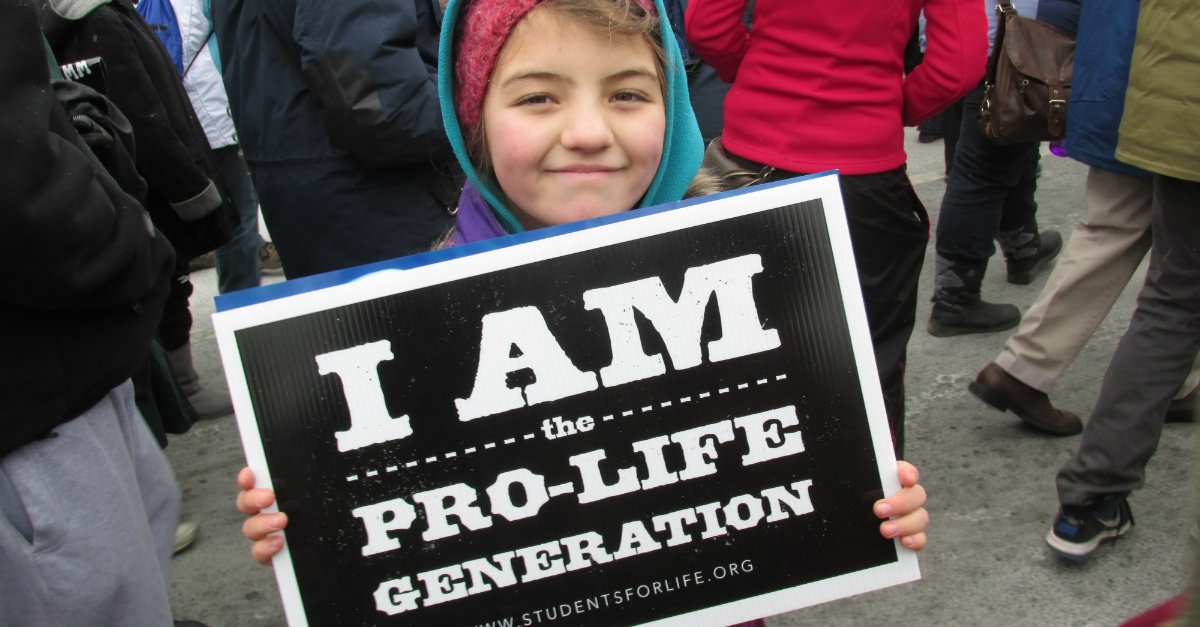 Thousands of people will descend upon Washington, D.C. today to take part in the March for Life. The pro-life march is a protest against legal abortion in America, and aims to give a voice to the unborn. Pro-lifers assemble at the Washington Monument at noon, and walk to the Supreme Court and the Capitol Building, where they will hear speakers including Vice President Mike Pence.

For Evangelicals, it’s a day of hope. The thousands of pro-lifers gathered in our nation’s capitol serve as a visual representation that we are not alone in our belief that life begins at conception. And we pray that the minds of others will be changed.

Scott Klusendorf, President of the Life Training Institute explains the pro-life belief like this:

“P1: It is wrong to intentionally kill an innocent human being.

The hard truth is that over 58 million abortions have been performed in the U.S. since the Roe v. Wade decision in 1973. 58 million.

Chelsea Patterson, an adoption and foster care advocate for the U.S. House of Representatives, writes for The Gospel Coalition that it is the responsibility of Christians to speak on behalf of the unborn. But fighting for what is right must go beyond D.C., and beyond the March for life.

She writes, “The real fight... isn’t in Congress or the courts. It’s in the hearts and minds of our neighbors—the men and women who sit next to you in church, serve at your favorite coffee shop, live next door. If we truly want to abolish abortion, we must recognize that the battle begins by loving and changing the hearts and minds of individuals, one person at a time.

“While I think the March for Life is an incredibly powerful display of commitment, the real work happens in our homes, our churches, our neighborhoods, our communities. Every one of us has an essential role to play in changing views on abortion, because we are uniquely situated to influence our neighbors.”

The issue of abortion hits a very personal note for Patterson. She was adopted from Romania. Her birth mother was a poor teenager who made the brave decision to carry her child to term, giving her a chance at life. Another woman made the choice to adopt her as her own daughter, giving her a loving home.

She explains simply, “Both women loved me. Both made choices that will affect my life forever.”

Klusendorf writes that Scripture is clear on the issue of life, even though the word “abortion” is not mentioned.

“Scripture is clear that all humans have value because they bear the image of their maker (Genesis 1:26-28; James 3:9). In laymen’s terms, that means humans are valuable in virtue of the kind of thing they are rather than some function they perform. Humans have value simply because they are human.

He also explains why fighting for the unborn should be an integral responsibility of the church:

“P1: In the Great Commission, Christ charged the church to go make disciples.

P2: The way we make disciples is to “teach them to obey” his commands.

P3: One of those commands is that we are not to shed innocent blood.

P4: Abortion is the shedding of innocent blood.

C: Therefore, preaching on abortion relates to the Great Commission responsibilities of the local church.”

You can get involved with the pro-life movement, even if you can’t make it to the March for Life today. After all, advocating for the unborn is a movement that Christians should support every day, not only at special events.

1. Learn about abortion laws in your state.

3. Contact your Congressmen and Senators about prioritizing pro-life policies.

4. Volunteer your time at pregnancy centers that support alternatives to abortion.

5. Educate others with the facts, but without judgment.

6. Pray for the hearts and minds of Americans to be changed on the issue of abortion.

Patterson writes, “Are you willing to lovingly advocate for the unborn? Will we use your breath to speak life into the hurting, the helpless, the broken? Will we use your lungs to proclaim that every life—no matter the ethnicity, disability, or sex—has innate value and is dearly loved by God?”

“I want to use my voice to advocate and speak up for those who don’t have one. I hope you, too, will leverage your words and actions to be a beacon of hope and healing to a hurting world.”