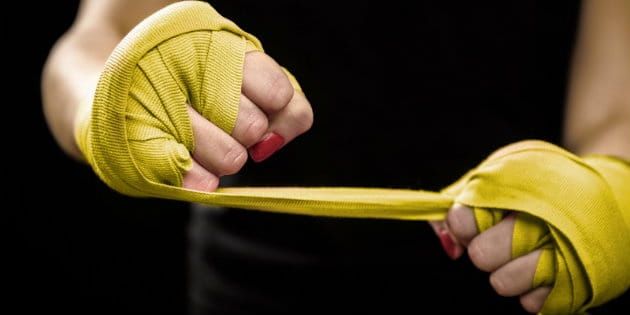 I grew up in a house dominated by three sisters, so naturally my parents made sure I learned to behave myself at an early age. I was taught that hitting a girl was wrong (in fact, hitting anyone was wrong), that it was polite to attend their tea parties even if you didn’t want to, and that if you didn’t have anything nice to say, you shouldn’t say anything at all. My family wasn’t old-fashioned, but as Christians, we did believe everyone was a precious child of God. This alone entitled them to respect. In the past decade though, our society has seen a massive amount of social change, and with every new shift comes difficult new questions.

Over at The Gospel Coalition, Justin Taylor attempts to explore one of our culture’s unusual new quandaries: Should we encourage women to fight? In particular, Taylor focuses on entertainment events such as Women’s MMA, calling into question whether such pastimes are becoming of Christian viewers. Taylor strongly argues that condoning such sports is akin to watching pornography, writing,

“Young and attractive kicka*s women hold a great appeal for many men too. Not only are they nice to look at, they can also relieve men of some of the burdensome sense of duty to treat women differently from men, to be gentler towards them, to protect them, to accord them particular honor, to be mindful of the advantages they generally enjoy naturally over women in power and agency, and to recognize the fact that women and men have many deeper differences in personality, behavior, and interests. Such representations of women can play into a pornographic mindset, which celebrates sex purged of the deeper reality of sexual difference, ridding sexual relations of any genuine reckoning with the particular subjective and objective otherness of the other sex, an otherness that should excite wonder, love, responsibility, and care.”

Complementarians will doubtlessly agree with Taylor, citing Biblical verses in Genesis 2 where God is said to have created humanity with different yet unifying genders and purposes. However, other Christians may argue that Taylor’s focus is far too narrow. Is it really productive to acknowledge the violence in Women’s MMA while giving men a free pass simply because they have more muscle? Scripture is rife with commands for Christians to abstain from conflict and to do no harm,

“He has shown you, O Man, what is good. And what does the LORD require of you? To act justly and to love mercy and to walk humbly with your God.” – Micah 6:8

“Then Jesus said to him, “Put your sword back into its place. For all who take the sword will perish by the sword.” - Matthew 26:52-54

Ultimately, this is a question with no easy answer. Some Christians will assert that God created the genders to flourish in specifically defined roles, while others will insist that free will and individuality are spiritual gifts which should not be ignored. All we, as Christians, can do is fervently pursue God with all our heart, soul, mind, and strength (Luke 10:27). We may all have different perspectives, but if we remember that each of us was made by God for his glory, perhaps we’ll discover wisdom where we least expected to.

What about you? What are your thoughts on violence, Christian conflict, and Women’s MMA? Be sure to leave a comment in the space below!