The Life and Legacy of Truett Cathy

The Life and Legacy of Truett Cathy 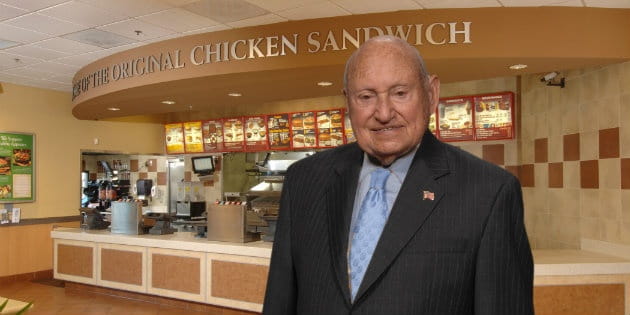 S. Truett Cathy passed away this past Monday, September 8th 2014, at the age of 93. His name immediately calls to mind the chicken franchise Chick-fil-A, which he founded. But Cathy’s legacy extends far deeper than the chicken sandwich. Not only is his fast-food chain renowned for its impeccable service and singular quality, but Cathy’s personal and philanthropic endeavors were truly inspirational.

Chik-fil-A, World Magazine reports the company claiming, has made positive sales growth for every year it’s been open.

“Cathy said his business plan was simple: keep debt to a minimum, expand cautiously, be courteous, and keep the menu basic. From food critics to customers, people who ate Cathy’s chicken almost universally agreed how good it was.”

“In an age when business functions 24 hours a day, 365 days a year, Cathy is a throwback to the blue-laws era. None of his restaurants is open on Sunday. Cathy thinks this provides his employees with a biblical ‘day of rest’ that is good for them.

While too many customers at retail and food establishments often complain about indifferent employees, Cathy is a stickler for kindness. He insists his employees demonstrate respect for customers and show appreciation for their patronage because it is good for business. ‘It doesn't cost you any more to be gracious in a service industry, but it sure pays great dividends…’”

Cathy was not just a chicken tycoon, however. World called him “the poster boy…for selflessness and integrity.” He told Philanthropy magazine, “My wife and I were brought up to believe that the more you give, the more you have…Few people actually believe in this, but we do." The article continues:

“Cathy's wealth, while considerable in dollars, is defined by nonmaterial standards. This includes the $18 million his WinShape Foundation spent just last year on foster homes, college scholarships, a summer camp, and marriage-counseling programs.

Marriage counseling? Cathy believes a stable home is fundamental to bringing up stable children. For those children damaged by broken family ties, Cathy's foundation operates a dozen homes headed by husband-wife teams. The goal is ‘to provide a loving, nurturing home to those children who are victims of circumstances and need a stable, secure family environment in which to grow and mature.’ The homes accept boys and girls between the ages of 6 and 13. They can accommodate as many as 12 children at a time."

At the time of the article quoted above, Cathy was known as a ‘grandfather’ to more than one hundred of those children. Additionally, he was a Sunday school teacher for boys for more than fifty years.

So while Chick-fil-A (and even Truett’s outspoken son Dan Cathy) is seen sometimes as a controversial player in today’s culture wars, let’s hope its founder will be remembered for what mattered most to him: good food, excellent service, generosity, and a deep love for Jesus Christ.