Why Asking Your Child for Forgiveness is the Best Parenting Tip

Why Asking Your Child for Forgiveness is the Best Parenting Tip 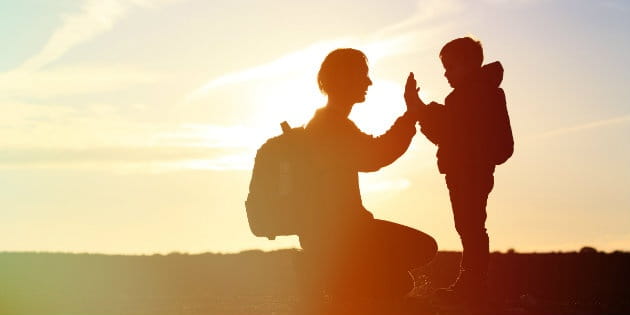 Have you ever lost it with your child, yelled when you shouldn’t have, or overreacted to their bad behavior? All parents have at some point, and most of the time this occurs when parents are stressed or pushed over the edge by their child’s sinful behavior … which means sometimes we respond to sin with sin. Have you ever asked your child to forgive you after responding too harshly?

David Mathis, author and executive editor for desiringGod.org, has written an article for desiringGod titled Ask Your Child to Forgive You. Mathis remember as a child when his father asked him for forgiveness. His father had overreacted to something Mathis had done, and this really made an impact on him as he knew and recognized that he had sinned first and was in the wrong. He says this about his father,

“He began owning the fact that even his child’s bad behavior was no excuse for a sinful response. He was learning first to recognize and admit his own sin, and remove the adult log from his own eye, in order to be a more careful and patient remover of the childhood speck from mine.”

Sometimes asking for forgiveness from your child may feel like giving in or even that it will “reveal a chink in the armor of parental authority,” as Mathis writes. Mathis doesn’t find this to be the case and explains the difference between talking down to your child vs. talking to them on their level:

“When I come down on them, with all my adult emotional weight, they can be crushed so easily. But when I come down to them, and stand with them in owning my own sin and recognizing my need for Jesus’s ongoing rescue, then I’m not only modeling repentance before them, but I’m also living the authentic Christian life myself, rather than letting parenting be an excuse for hypocrisy.”

Don’t expect to be the perfect role model for your children or even the perfect disciplinarian … because that won’t happen. We are not perfect; therefore, our behavior is not perfect. Parents can do more good for their children by recognizing their own flaws and pointing their children to the only one who is flawless, Jesus Christ. By asking your child for forgiveness when you overreact, you can explain to them that we are all sinners but Jesus came to forgive our sins and He taught us to forgive one another. Asking for forgiveness helps crush the myth that we can ever be good enough for God’s grace.

Mathis points out 3 lessons he’s learning while trying to love his sons in light of his own sin:

1. God is not just working through you as a parent, but on you.

2. True confession is heartfelt, not Forced.

“But genuine confession isn’t results-oriented. It rises from an awareness of the God-belittling ways we have treated our children and from sincerely grieving our failure to live up to our calling. We recognize that we have misrepresented God. He is gracious and merciful; I have been ungracious and exacting. He is slow to anger; I have been short-tempered, erupting in anger at my child’s disobedience. He is abounding in steadfast love and faithfulness; I have been stingy and unreliable.”

After you apologize and ask for forgiveness try not to bring the conversation back to “but you did this,” “but when you,” or “but you really need to.” Mathis advises, “The most meaningful conversations with our kids are the ones in which we can confess our own weakness without then turning and putting it back on them.”

Apologizing to someone is not weak … but it shows our weaknesses and our recognition of sin to those whom we ask forgiveness from. Mathis concludes,

“Yes, apologizing does show our weaknesses — in exactly the way our children need to see them. We “mature” parents do not stand with God on the other side of some great divide far away from our sinful children. We stand with them as sinners, still desperately and consistently in need of God’s grace and his power for change.”

Ephesians 4:32 “Be kind and compassionate to one another, forgiving each other, just as in Christ God forgave you.”

Related article:
How to Forgive Someone Who Isn’t Sorry

iBelieve.com: How can we be more intentional while spending more time with our kids? - Nicole Unice from ibelievedotcom on GodTube.