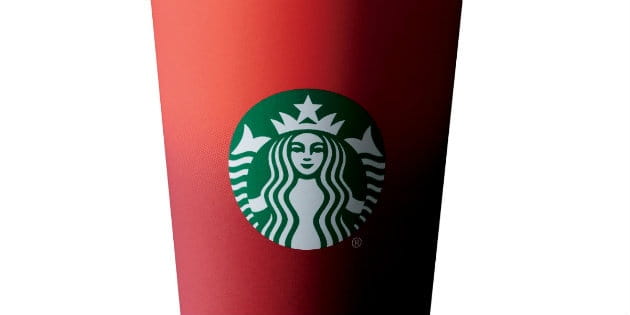 Every year around this time, it seems like there is some kind of outrage about either too much Christmas or not enough Christmas. It isn’t even Thanksgiving yet, but people all over the Internet are up in arms about the fact that the Starbucks red cups are back...without any mention of Christmas.

Christians are talking about a “War on Christmas,” claiming these minimalistic red cups are only the latest in “attacks” against Christmas, or worse, Christianity.

But is it really that serious? Are simplistic red cups from a popular coffee chain reason for Christians to be upset?

He goes on to explain what makes good business and marketing sense about this design choice by Starbucks: “We live in a pluralistic society that – and I know this will come as a shock to the Christmas warriors – celebrates multiple religious holidays in the month of December. It makes perfect sense for them to try to appeal to as many customers as possible in order to make as much money as possible by embracing the entire range of things being celebrated in December, instead of focusing on just one particular niche.”

When you think about it from the perspective of Starbucks, he’s right. Why cover the cups in Christmas imagery or wording when that’s only one of the upcoming holidays? I don’t think a simple red cup means Starbucks hates Jesus, but that’s what some influential Christian leaders are saying.

I have a degree in graphic design, and I personally think the minimalistic style of the cups is visually appealing. All the glitter, lights, tinsel, and decorations of Christmas can be overwhelming, so a simple design seems to me like a welcome contrast. And as a Christian, I couldn’t care any less about the fact that Jesus isn’t mentioned and a manger scene isn’t illustrated.

Christmas is still Christmas to me whether or not my Starbucks cup says it.

“By turning Christmas into a battle over ideology and marketing, we – not Starbucks or Target or anybody else – strip this holiest of days of the very significance we’re claiming to defend,” Zack says.

I agree. Why are Christians, the very ones who should be celebrating the holiness of this holiday and focusing on the birth of our Savior, the ones causing an uproar about a coffee cup design? Why are we taking away from the glory of the Gospel story and what Christmas truly means and instead choosing to talk about this, of all things?

Why are we encouraging people to tell our baristas that our name is “Merry Christmas” just so they’ll write it on our cups? Shouldn’t we be encouraging people with the good news of Jesus Christ who came to this earth as a baby to be our salvation instead?

“There is no War On Christmas™,” Zack concludes, “but there is a war on Christmas of our own creation and it’s drowning out the radical message of humility, solidarity, and hope that is the Incarnation.”

Maybe Starbucks isn’t the root of the problem here after all. Maybe the real issue lies with Christians who are choosing to be outraged over a design choice instead of choosing to celebrate the true reason for this season.

“Maybe this is the year that we can shift our priorities away from what doesn’t matter to what matters more than we know,” Emily C. Heath says in her “Christians and Coffee Cups” article. “Maybe this year we can set our sights a little higher than changing red cups, and instead try to change the world. And maybe this year we can stop yelling at others to “Keep Christ in Christmas” and instead focus on being Christlike ourselves.”

We can choose to boycott Starbucks, but what will that really accomplish? Emily suggests this alternative: “Buy someone a coffee. In one of those red cups. ...If you look closely enough, you just might find Jesus in the guy behind you in line. Because Christ is already at Starbucks, just as Christ is everywhere. I don’t need his name on a paper cup to tell me that.”

I don’t either. I’ll see you at Starbucks, red cup in hand, proudly spreading Christmas cheer and celebrating the birth of my Savior, Jesus Christ, because He’s what matters most this season.

For more on how to focus on Christ this season, read "A Worshipping Christmas" from Peter Beck.

What do you think? Are you angry that Starbucks took Christmas off their cups or is your Christmas unaffected by their new design?