Exactly what were the cattle doing?

Exactly what were the cattle doing?

Today is a revisit of a "Christmas Classic" from earlier. How does a blog become a classic?  It is your blog, your site, you pay the server charge and you can call it whatever you want. So enjoy a classic from Christmas past…

One of my contributions with this modest little blog is to continually ask the tough questions.

While listening to  "Away in a Manger" at a recent Christmas program my inquiring mind kicked in. You likely know verse three of the song.

As I listened an important series of difficult and probing inquiries popped into my head. What noise, exactly, were the cattle making when they started lowing? Was this normal cow talk? Did lowing just sound better than mooing in the lyric or is lowing a more spiritual and reverent cow sound? And then the most important question came to mind. What is wrong with me?

I can't answer the last question but I can help with the others. Lowing is defined at dictionary.com as "the characteristic sound uttered by cattle; a moo". 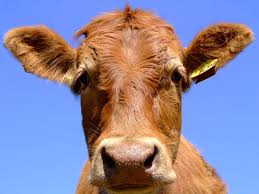 So little baby Jesus was awakened by the characteristic sound uttered by a cow. That would not have flowed well in the lyric so I understand using lowing. The next part of the lyric is disturbing to those of us who are parents. If any of the babies who grew up in our household were awakened by cattle lowing they would be squalling (the characteristic sound uttered by a ticked off baby; a scream).  During the course of my intrepid investigating I discovered that this verse was not original to the song. It was added in the early 1900's by a Methodist minister named John T. McFarland for a children's program. While verse three is not a part of the original Christmas carol canon it does create an image of Jesus that we need to rethink.

I remember as a child singing "Away in a Manger" and picturing the baby Jesus with this beatific smile on his face and a little halo hovering over his head. In my imagination the animals were swaying and singing like the campfire scene from the movie "Three Amigos". I pictured Mary and Joseph as awed spectators as the baby Jesus acknowledged the shepherds and welcomed them to his place (remember…the earlier lyrics told us he didn't have a crib). My images of the baby Jesus were indeed childish. But I wonder if we don't carry a little of that flawed perspective about the "Baby Jesus" into our adult Christian journey (like Ricky Bobby in the movie Talladega Nights…you bad Christians know what I am talking about).

This Christmas why not take a little time to think about the implications of the incarnation. That nice little theological word is used to denote when the second person of the Trinity assumed human form in the person of Jesus Christ and became both fully God and fully man. C.S. Lewis called the incarnation "the Grand Miracle." He wrote: "The central miracle asserted by Christians is the Incarnation…. Every other miracle prepares for this, or exhibits this, or results from this…. It was the central event in the history of the Earth-the very thing that the whole story has been about" (from Miracles, chapter 14).

By a miracle that passes human comprehension, the Creator entered his creation, the Eternal entered time, God became human-in order to die and rise again for the salvation of all people. "He comes down; down from the heights of absolute being into time and space, down into humanity; down further still … (to) the womb … down to the very roots and sea-bed of the Nature He has created. But He goes down to come up again and bring the whole ruined world up with Him" (Miracles, C.S. Lewis).

Take a moment to meditate on the mystery of that. Fully God and fully man. I am sure the little Lord Jesus would have had the normal response to being awakened by any cow noise…lowing or other. His swaddling clothes had to be changed just like any baby. Chuck Swindoll described Him as diety in diapers.

How does that affect me this Christmas? Because God became flesh I can relate to a Savior that understands the frailties of my flesh. Because the Creator understands His creation I can be sure that God understands my pain, frustration and loneliness. It is difficult for me to relate to an invisible God. That is the miracle of God becoming man. I can relate to Jesus because He has walked in my sandals. Joni and I were always appreciative and blessed when people expressed love and care while she was battling breast cancer. But when a breast cancer survivor expressed that love it connected on a different level. They had been there, felt the fear, fought the tiring battle and traveled the long road. That is the sovereign genius of the incarnation. We can relate to God in flesh in a way that is different. When I suffer I know that Jesus understands. He has been there. When I am lonely or feeling betrayed I can know (in my finite ability) that He understands. When I am joyful and laughing He understands. By becoming like me I can believe that Jesus can empathize with me on a different level. Because I know He gets it then I also get it. God loves me and Jesus has my back.

My dear children, I write this to you so that you will not sin. But if anybody does sin, we have one who speaks to the Father in our defense—Jesus Christ, the Righteous One.   (I John 2)

Jesus became our advocate and our path to salvation when He arrived on earth. The miracle in the manger was not Jesus ignoring stupid cows. The miracle was God becoming flesh.