I Thought I Was Tough...Updated

I Thought I Was Tough...Updated

Update…this article has been very popular so I am reposting it for those who missed the first round and updating it for the rest.

I am not a crier. So it was a bit out of character when the tears started flowing yesterday as I drove through the canyon in downtown Dallas. I blame Lindsay for this event. Lindsay is my bride’s cousin who moved to Texas recently. She already loved country music so that saved us some time to indoctrinate her. We love having her in Big D but she is going to have to stop introducing me to songs that make driving dangerous.

Lindsay told us about a song that we just had to hear. So I downloaded it to the trusty iPod and fired it up as I drove to work yesterday. The song is called Tough and it is performed by Craig Morgan. If you know much about our past year you will quickly see why this song had the Old Yeller/Field of Dreams effect on the eyeballs. The lyrics start innocently enough…

She’s in the kitchen at the crack of dawn
Bacon’s on, coffee’s strong
Kids running wild, taking off their clothes
If she’s a nervous wreck, well it never shows
Takes one to football and one to dance
Hits the Y for aerobics class
Drops by the bank, stops at the store
Has on a smile when I walk through the door
The last to go to bed, she’ll be the first one up
And I thought I was tough

She’s strong, pushes on, can’t slow her down
She can take anything life dishes out
There was a time
Back before she was mine
When I thought I was tough

That made me smile as I remembered the days when Joni juggled three active boys through school, baseball, basketball, and forced Cotillion dance lessons. I was a little too absent as I carved out my career. I finally realized how tough she really was to raise three wonderful sons while her husband traveled around the country and world. I appreciated how tough she was while sacrificing weekends with our friends because sports teams insist on playing on the weekends and sports television was my job. So a mixture of fond memories and some regrets filled my mind when I got ambushed by the next verse.

We sat there five years ago
The doctors let us know the tests showed
She’d have to fight to live, I broke down and cried
She held me and said it’s gonna be alright
She wore that wig to church
Pink ribbon pinned there on her shirt
No room for fear, full of faith
Hands held high, singing Amazing Grace
Never once complained, refusing to give up
And I thought I was tough

I am not ashamed to admit that those words turned on the waterworks. That is my bride and that has been her journey. She has been full of faith from diagnosis day till this moment. No room for fear because she believes that faith in God casts out fear as you rest in His Sovereign hand. I have probably complained more about my knees aching than she has about cancer. And she has refused to give up because she wants to live and serve the Lord. If I thought I was tough that misguided notion fell by the wayside as I watched Joni battle cancer with the courage that a young shepherd boy challenged a Philistine giant. Now we have passed the one year mark, the scans have been clear and the treatments are nearly done.

How can I thank all of you who have prayed so faithfully over the past year? Many of you have prayed so diligently and I don’t even know you. We may never meet this side of eternity. Yet you have cared enough to pray for us throughout this long journey. Amazing. Joni has retired the wig now and is wearing her very own hair to church. Here is a picture from Easter weekend. 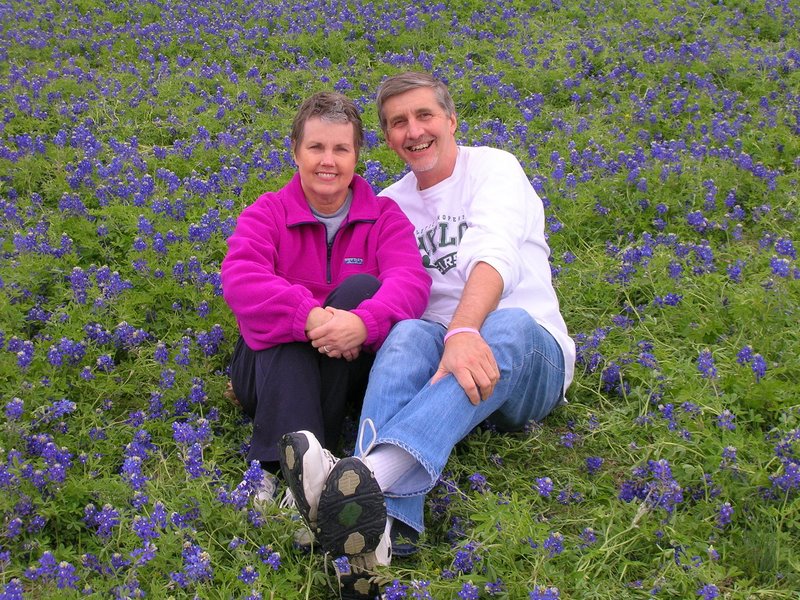 Joni’s strength and dignity have humbled me. There was a time before she was mine when I thought I was tough. No more. But there is one other thing I have learned during this difficult year.

Yet it was good of you to share in my (our) troubles.  Phil 4

Thank you. It really was good of you to share in our troubles. And we are so grateful and humbled.

On Mother’s Day Joni was asked to throw out the first pitch at the Texas Ranger’s Major League Baseball game. 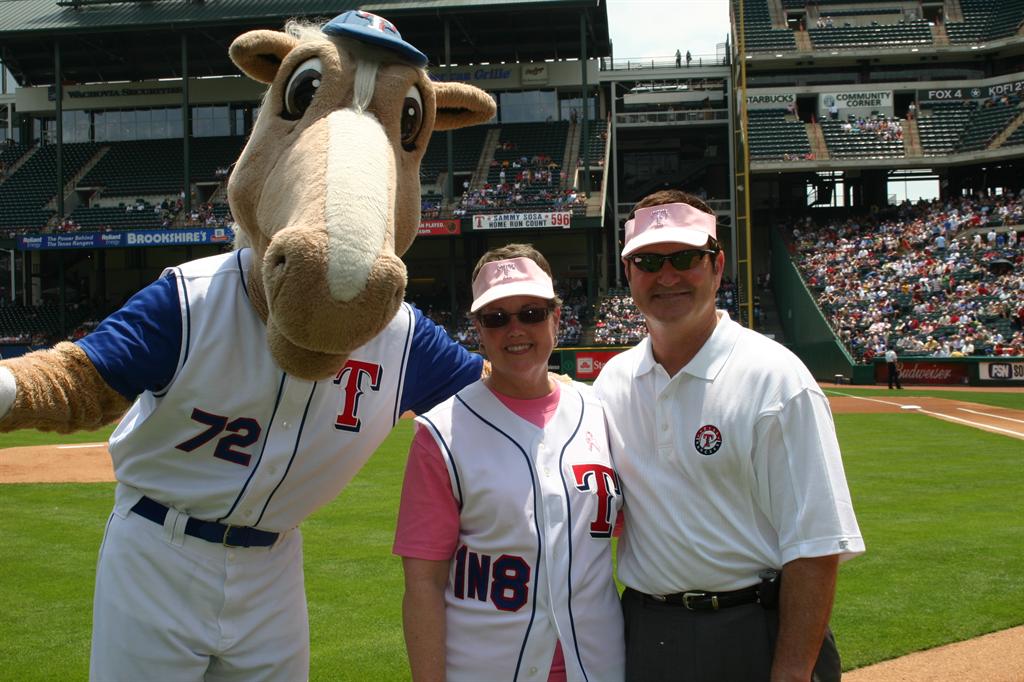 That day is designated as Breast Cancer Awareness Day by MLB. Joni threw out the first pitch as a survivor! What an amazing moment for us and especially for her. She has been a warrior and I am so proud of her. Fifty family and friends showed up to cheer her on. She made it to the plate on one bounce. 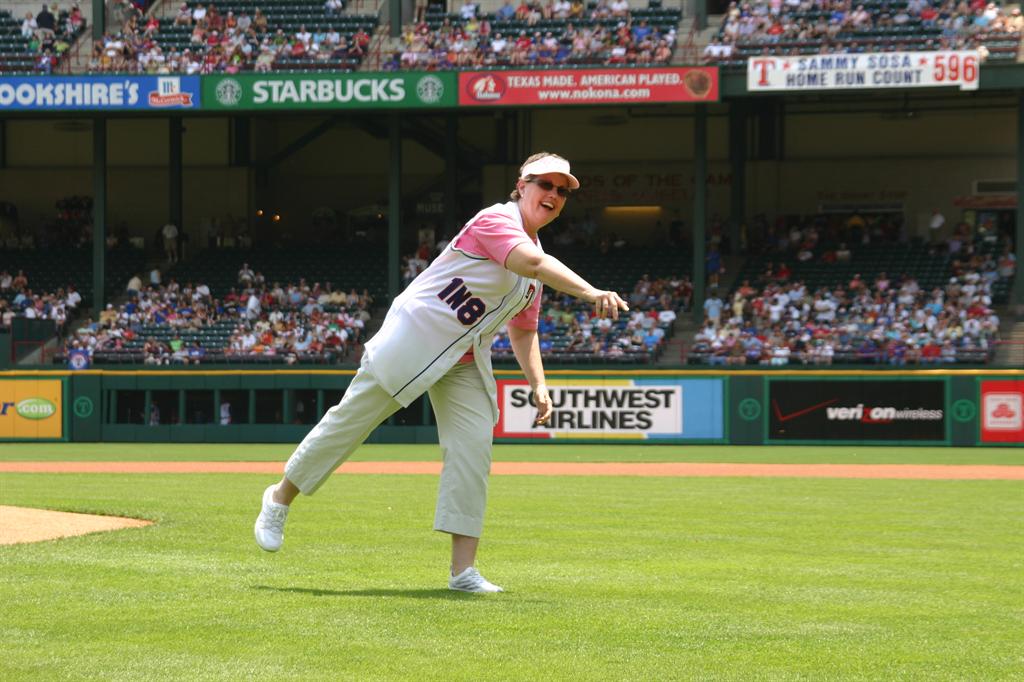 Notice that her uniform number is 1 N 8. One in eight women will be diagnosed with breast cancer during their lifetime. Joni’s message to any woman reading this is to get regular testing and to be persistant if you believe something is wrong. With early detection the five year survival rate is 96%! Please, please, please get your mammograms and yearly exams. But you should also know a wonderful promise if your diagnosis happens to not be positive. Many people have said that they could not have done what Joni and I have done in the past 15 months. We would have said the same thing before our cancer journey began. Here is what we know for sure. God meets you at the moment of need and provides the grace and strength you need for each moment. You can’t bank it in advance. It is moment by moment as you depend on Him. You can do it. We did.