I have been around the rich and famous for most of my career while never joining them in richness or fame. I often tell my boys that celebrity too often ruins the offspring of the famous. So I dramatically inform my three sons that I have "taken the burden of mediocrity on my career to save them from such a fate". They seem to doubt my sincerity. But if I had to make a choice I would quickly choose for them to be solid citizens, good men and authentic followers of Jesus rather than for me to be a famous author or director. And if my boys are reading this…I am sincere.

A very large number of the rich and famous I have observed have been disappointing and it is often in one particular area. How they treat those who have nothing to offer them. I watched a well known Christian sports figure consistently be condescending to service people and waiters. I was saddened as a famous Christian athlete profanely addressed a young TV crew member who simply asked for a moment of his time. The negative examples are numerous but that is not the point of this article.

Thank God some celebrities handle fame with grace and class. I never saw Nolan Ryan respond in a rude or dismissing way to any fan or media member. The recently deceased Ernie Harwell treated princes and paupers exactly the same. Coach John Wooden was another celebrity who handled his fame with amazing class.

It is easy to be suspicious when superstar players like Bill Walton or Kareem Abdul-Jabbar talk about how much Coach Wooden cared about them. Cynics would say that it is easy to love two of the best players in history. Of course other players and acquaintances also raved about "Coach" and his influence. I had a brief season of my life where I got to see the man up close and he passed my test for how he treated "the least of these".

A little background is in order. In the late 70's Athletes in Action fielded a barnstorming basketball team of Christian athletes that played some of the best teams in the NCAA. I was the radio play by play announcer for that team. At halftime the players would tell their story about their faith to the audience. They defeated then number one San Francisco and number three UNLV in one memorable stretch. UNLV coach Jerry Tarkanian once said after a blowout loss to AIA, "They beat you up in the first half, pray for you at halftime, then beat you up in the second half."

Athletes in Action put together a television network to cover those big games. For reasons I still don't understand they picked me to do the television play by play. Most likely it was a lack of budget. And then they announced that the color analyst for my first game would be recently retired legend John Wooden. He was the only man to be inducted into the Basketball Hall of Fame as both a player and a coach. The Wizard of Westwood had won an unprecedented 10 NCAA Championships in 12 years. And he was beginning his broadcast career with Dave Burchett, the former morning voice of daytime powerhouse WCHI in Chillicothe, Ohio.

I accompanied the executive producer and director to the airport to pick up Coach Wooden for a production meeting. He immediately flashed that warm smile and greeted us all. When we walked to the car to head to our meeting I learned a lot about Coach Wooden. We were driving a small Toyota and it was a bit cramped for my 6'5" frame. I started to climb into the back and Coach gently grabbed me.

"No, you are too tall to get back there. You ride up front where there is more leg room. I'll get in the back."

So I watched as a 67 year old Hall of Fame coach crawled into the back seat so that a 25 year old nobody would be more comfortable. That was John Wooden. And I have never forgotten that image. The "Wizard of Westwood" crammed into the back without a complaint for the comfort of a kid he had just met. I got to work one season with Coach Wooden as my analyst. 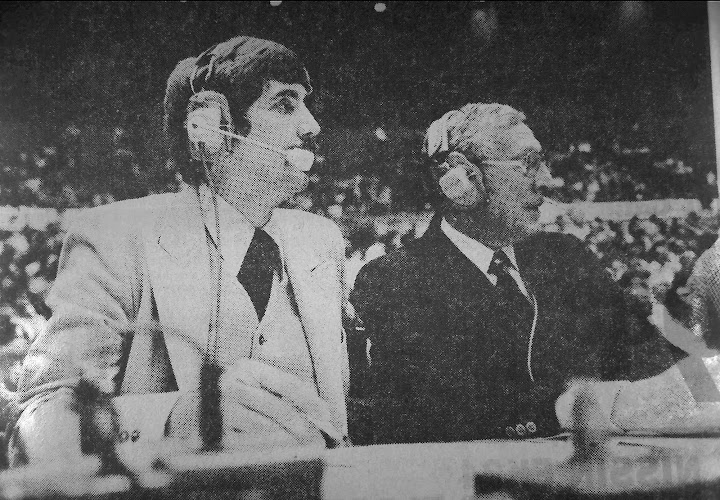 Later I would read his books and come across thoughts like this.

And I realized that John Wooden didn't say things that he didn't live. That is why so many people loved him. He was selfless and kind. And he always put the credit where he felt it belonged. First to his Lord and second to his beloved wife Nellie. He was an important influence in my desire to be authentic. One of Coach Wooden's most famous quotes was this one.

I am just one of thousands of people who were influenced by the life of John Wooden. It will be humbling for him in heaven to see the impact of his life. A life that well lived is a treasure for all of us to enjoy. Coach Wooden said this about what really matters.

"Material possessions, winning scores, and great reputations are meaningless in the eyes of the Lord, because He knows what we really are and that is all that matters."

As John Wooden finished his race on earth he might well have quoted another selfless man named Paul.

I have fought the good fight, I have finished the race, and I have remained faithful.  And now the prize awaits me—the crown of righteousness, which the Lord, the righteous Judge, will give me on the day of his return. And the prize is not just for me but for all who eagerly look forward to his appearing. (2 Timothy 4, NLT)

Enjoy the prize Coach. You fought well and remained faithful to the end. Thanks for your example.