In the late 1930s, Corrie ten Boom was living in a small town in the Netherlands, better known as Holland. Her home, called the Beje (pronounced bay-yay), was a tilting, centuries-old house in the center of Haarlem and its bumpy brick streets. 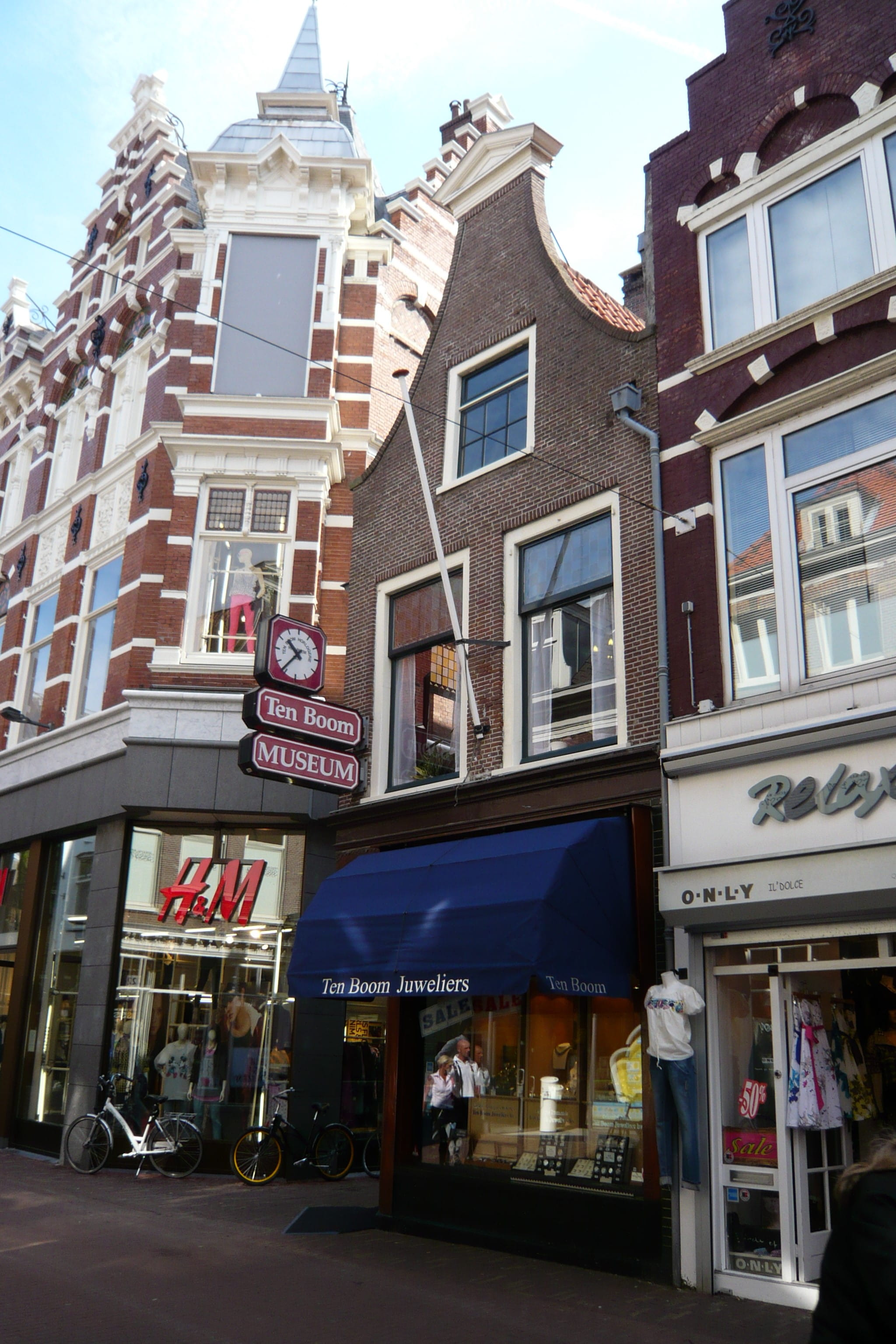 Actually it was two houses. In front it looked like a typical old-Haarlem structure: three stories high, two rooms deep and one room wide. But sometime in its history the rear wall had been knocked through to join it with the even thinner, steeper house behind it.

Horrified by the German onslaught against the Jewish people of her country, Corrie – along with her family – began to hide within their home those most threatened by arrest. It was precisely the eccentric design and construction of their house that allowed such a perfect “hiding place” to be built in Corrie’s bedroom. To this day, you can tour the home and see where so many Jewish persons were hidden, protected from capture and, most certainly, death.

The family was eventually discovered for doing this and transported deep within Germany to a place whose very name struck terror – Ravensbruck, the notorious extermination camp. Her father died within the first two weeks of his arrest. Corrie’s sister, Betsie, eventually died in Ravensbruck as well.

Corrie survived. The humiliation, the beatings, the deprivation, the starvation, the sickness, the stench – she survived. Corrie spent the rest of her life speaking of Christ’s love and forgiveness, mercy and sustenance, goodness and trustworthiness, wherever she went. Eventually her story was captured in the bestselling book The Hiding Place, one of the most life-changing biographies you will ever read. Corrie became an ambassador to the world.

I traveled to see her house in Haarlem, to see the “hiding place” and, perhaps most of all, to remember what it means to trust God.

Corrie learned to trust God early through the faith of her family. When she witnessed the death of a baby as a young girl, she realized that death could come to anyone. That night she burst into tears and sobbed to her father: “I need you! You can’t die! You can’t!”

Her father sat down on the edge of her narrow bed. “Corrie,” he began gently, “when you and I go to Amsterdam – when do I give you your ticket?”

She sniffed a few times, considering his words.

“Why, just before we get on the train.”

“Exactly. And our wise Father in heaven knows when we’re going to need things, too. Don’t run out ahead of him, Corrie. When the time comes that some of us will have to die, you will look into your heart and find the strength you need – just in time.”

Trusting in God is an interesting thing. It involves a “letting go.”

If I trust you with something, it means I give it to you. It passes from my hand to yours. It is no longer in my possession. If I have confidence in your character and abilities, there is a relief at the passing. I no longer worry or concern myself with the matter. It is, as they say, “in good hands.” This means that trust is very much about the person being trusted. It also means acceptance. If I trust you, then I accept what you say and what you do.

We are called to trust God in the same way including the ultimate area of trust: His will.

The primary will of God for your life is the same as it is for everybody else – to know and to love Him. When someone asked Jesus what the heart of life was all about, what the ultimate law to follow was, this is what He said: “‘You must love the Lord your God with all your heart, all your soul, and all your mind.’ This is the first and greatest commandment” (Matthew 22:37-38, NIV). We came into that love relationship through our acceptance of Christ’s work on the cross.

If you want to know what God’s moral will is, just ask yourself this question: What does the Bible say?

Yes, that seems simplistic. And interpreting the Bible is not always easy. But most of the time, it is simple. Notice how the Apostle Paul explains this in his second letter to Timothy: “All Scripture is inspired by God and is useful to teach us what is true and to make us realize what is wrong in our lives. It straightens us out and teaches us to do what is right. It is God’s way of preparing us in every way, fully equipped for every good thing God wants us to do” (2 Timothy 3:16-17, NLT).

If you’re struggling with whether God wants you to do something, or whether it’s okay with God, you can stop struggling. God has already spoken and made His will known to you because His guidance for the day-in, day-out flow of your life is primarily moral. The question is whether you will trust it.

One night in the Beje, while Holland desperately fought a battle against a German invasion it would eventually lose, dogfights raged overhead, streaking the sky above with fire. Corrie heard her sister stirring in the kitchen and decided to get up and join her.

Suddenly there was an explosion, rattling the dishes in the cupboard. Corrie and Betsie stayed up another hour, talking. When Corrie returned to her bed, she found a jagged piece of metal, 10 inches long, that had cut through her pillow where her head had been laying.

“Betsie, if I hadn’t heard you in the kitchen–”

But Betsie put a finger on her mouth. “Don’t say it, Corrie! There are no ‘ifs’ in God’s world. And no places that are safer than other places. The center of His will is our only safety – O Corrie, let us pray that we may always know it!”

The center of God’s will, and specifically his moral will…

… is the safest place on earth.

Adapted from James Emery White, A Traveler’s Guide to the Kingdom (InterVarsity Press).

James Emery White is the founding and senior pastor of Mecklenburg Community Church in Charlotte, NC, and the ranked adjunctive professor of theology and culture at Gordon-Conwell Theological Seminary, where he also served as their fourth president. His latest book, Meet Generation Z: Understanding and Reaching the New Post-Christian World, is available on Amazon. To enjoy a free subscription to the Church & Culture blog, visit ChurchAndCulture.org, where you can view past blogs in our archive and read the latest church and culture news from around the world. Follow Dr. White on twitter @JamesEmeryWhite.