Witnessing to a Serial Killer: Did He Really Repent?

Witnessing to a Serial Killer: Did He Really Repent? 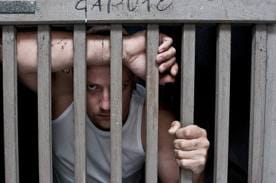 I never expected to meet a murderer. I’m not a cop. I’m not a lawyer. I don’t even watch C.S.I.

Barry sobbed uncontrollably, unaware I heard his cries. I quietly slipped into the pew beside him, handed him a tissue and asked, “Do you want to talk about it?” He gathered his composure and poured out his heart. “I feel so empty, so hopeless! I didn’t know where to go and my next-door neighbor said I’d feel better if I went to church. This is the first one I saw. Are you open for business?” he queried.

“We’re a 24-hour establishment,” I said. “God never sleeps.” My Wednesday night music rehearsal was ready to begin, but the band would have to wait. We left the sanctuary and headed to my office to chat. Barry’s questions were textbook. “How can I be sure I won’t go to hell?” he inquired. “The last time I heard a preacher on TV, he said everybody goes to hell.”

“Didn’t he talk about Jesus?” I responded. Barry shook his head. “I don’t remember that part.”

Telling Barry how to become a Jesus-follower was like leading a horse to water. Barry was thirsty, eager and ready to listen. I felt the same exhilaration as Paul when the Philippian jailer cried, “What must I do to be saved?” I didn’t even need to whip out my Four Spiritual Laws … Barry hung on every word, every scripture. He prayed simply, asking Jesus to come into his heart. He beamed like a Cheshire cat as he said “amen.”

I invited my new friend to church to hear my husband Roger preach. Barry became a regular. We treated him like family, swapping stories over Sunday lunch. He loved to talk about his mom and his growing up years. Barry even befriended my kids, Bronwyn and Richard. They were fresh out of college, and our buddy offered to help them find jobs.

His business frequently took him out of town, but he often phoned us while he was on the road. Then Barry disappeared off the radar. We hadn’t heard from him in a couple of weeks and began to worry. One frosty November morning we learned the truth. Roger and I were leisurely sipping our McCoffees and scanning the morning headlines. I choked on my McMuffin. Barry’s photo was plastered all over the front page.

Our new “brother in Christ” was accused of stabbing a local dentist 27 times. He was caught dead to rights and the Feds said he was wanted in seven states for strangling, shooting or stabbing his victims. “Professional hit man” was his real job. Roger and I were horrified and shocked. We had a killer on speed-dial.

We welcomed this guy into our home, sharing our Easter ham and yams and joking with our kids. How could Barry be “two people”? He was convicted and now serves a life sentence, rotting in a seedy Arizona prison cell.

How could we have been so duped? I felt so betrayed and used. Questions flooded my mind. Was his “Christian persona” just an alibi? Were we simply cultivated as character witnesses to speak in his defense? But I heard the earnestness in his prayer. I saw his tears, his contrite heart.

Can I ever forgive this man? Jesus forgave the thief on the cross in the final moments of his life. A crook hanging between heaven and earth was promised a place in Paradise. Paul was a murderer, a Christian-Killer. Was God saying to me, “It’s not over until it’s over...” Barry probably needs us now more than ever. No secrets. No lies. We can help him re-build his life and connect with God.

I still struggle with anger and paralyzing terror. Can I ever love this man unconditionally, after all the atrocities he’s committed? I hope so. Every day and every prayer brings me closer to God’s heart for him.

Could you make the leap from fear to forgiveness? I’m working on it.

“For the Son of Man has come to save that which was lost. What do you think? If any man has a hundred sheep, and one of them has gone astray, does he not leave the ninety-nine on the mountains and go and search for the one that is straying? If it turns out that he finds it, truly I say to you, he rejoices over it more than over the ninety-nine that have not gone astray. So it is not the will of your Father who is in heaven that one of the little ones perish.” Matthew 18:11-15 NAS

Did Barry really repent? Will we see him in heaven? God knows. I have high hopes.

For further study, please read “Apostasy: Can a Christian Fall Away?” and  “Spiritual Abortion” by Dr. Roger Barrier on www.preachitteachit.org.