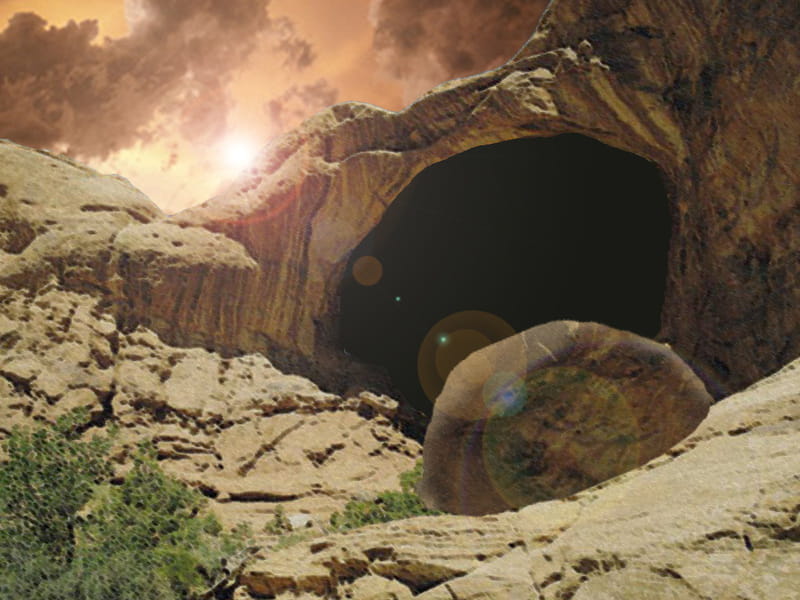 Satin banners sagging. Lilies drooping. Extra chairs are stowed. Pastors tall and short, old and young, slump in an exhausted heap after leading a bazillion services during Holy Week. The large chocolate bunny I consumed after church has gone directly to my growing thighs. Easter is over.

You may not experience ALL of these symptoms, but Easter is the joyful climax of the liturgical year. You can’t top Jesus jumping out of the grave. The whole Bible leads up to that amazing, holy moment.

Jesus’ disciples did not experience post-Easter letdown. You don’t have to either.

Can Easter change your daily life? I believe it can. Let’s look at a few Bible characters we can emulate.

Thomas, the skeptic, wanted proof: rock-solid evidence. Jesus, in His compassion, gave him just that.

John tells us in his gospel:

26 A week later his disciples were in the house again, and Thomas was with them. Though the doors were locked, Jesus came and stood among them and said, “Peace be with you!”27 Then he said to Thomas “Put your finger here; see my hands. Reach out your hand and put it into my side. Stop doubting and believe.”28 Thomas said to him, “My Lord and my God!” John 20:26-28. NIV

Jesus was no longer his teacher. Doubting Thomas became convinced that Christ was God Himself, His Lord and Master. Thomas preached the Gospel fearlessly and faithfully to the ends of the earth. Historians tell us that the old apostle was stabbed with a spear in 72 A.D. while in prayer on a hill in Mylapur, India.

You don’t have to wonder about Jesus. Touch His nail-pierced hands and wounded side. His resurrection proves you can follow Him as your Lord and your God. His power becomes your power. Don’t be a wimpy Christian anymore. Jesus is bigger than that. And so are you.

John, the beloved disciple, was purported to be Jesus’ cousin by many historians. He probably remembered playing stickball with Jesus as a little boy. John probably visited Jesus’ carpenter shop many times. He was the only disciple who watched Christ’s brutal crucifixion and promised to care for Jesus’ aging mother. John saw the gory blood. He grieved as he witnessed his cousin’s last breath. But three days later, John was transformed by Christ’s resurrection. No earthly miracles Christ had performed prepared him for this:

John was filled with wonder and awe at what He saw. Jesus’ mangled corpse was wrapped in 75 pounds of spices. A linen napkin was placed over His face. Easter morning, the gigantic boulder was rolled down the hill. The sixteen cracker jack Roman Special Forces team was nowhere to be found. And to top it off, the bandages were not unrolled, they remained in the shape of the corpse. Jesus had dematerialized folded His head napkin, and laid it on the other side of the tomb.

John was filled with a sense of wonder. Every day, for the rest of his long life, John was in awe of His Master. Ninety-year-old John, imprisoned on the island of Patmos, was the one Jesus trusted to write Revelation-the heavenly vision that predicted the glories of heaven and the end of time.

We can live lives of wonder because of Christ’s resurrection. Post-conversion, most Christians slug their way through daily living in apathy. The Bible is boring and the events of Jesus’ life, death and resurrection seem like holy mythology. Nothing is fresh or new.

But have you ever taken a child to Disneyland? Their eyes are as big as saucers, and every mouse, princess and teacup seem magical and amazing! If we truly believe Jesus conquered death and the grave, we can live our lives with a sense of wonder. We can wake up every morning, just waiting to hear our Savior speak, looking for Him in creation and seeing Him in the lives of your Christian brothers and sisters. Don’t let your Christian walk become mundane. Open your eyes and marvel at His work.

Finally, you don’t have to experience post-partum depression after Easter because God is a God of second chances. Jesus cooked breakfast for Peter and restored him to ministry. Nobody messed up more than Peter. He denied Christ. He always said the wrong thing. And he picked up his nets and went back to the fishing business after Jesus died.

Jesus gently spoke to Pete as he chewed his trout sandwich.

Peter was hurt because Jesus asked him the third time, “Do you love me?”He said, “Lord, you know all things; you know that I love you.” Jesus said, “Feed my sheep. John 21:12-17 NIV

Peter loved Jesus imperfectly. Jesus assured Him it didn’t matter. He called Him to do the most important task in the world. Peter took on Christ’s mantle, the mantle of a shepherd. The flawed, bumbling apostle became the rock Jesus knew he could be. Peter preached at Pentecost, and pastored the church in Jerusalem. He even shared in Christ’s crucifixion. In 34 A.D., Peter died in Rome, choosing to be crucified upside down because he felt unworthy to be executed in the same manner as his Master.

So how can Jesus’ resurrection change you? You now have hope. Jesus doesn’t care about your past failures or your stupid words. You may have denied Him. You may be on God’s plan “Z” for your life. You can begin again, and Jesus can infuse your life with unbelievable resurrection power. You can change the world. Yes, you!

So lay aside your doubts and failures. See the wonder of the Divine every day. Embrace the hope that He offers you. He is risen indeed!