Kiddie Chaos in the Choir Loft

Kiddie Chaos in the Choir Loft 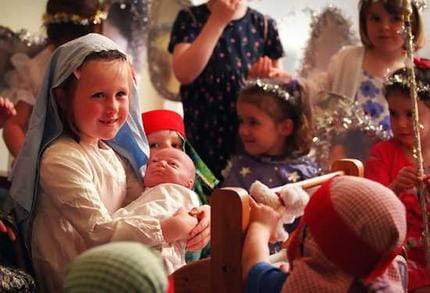 Onstage our kiddie Christmas choir looked great. Backstage looked more like hell than heaven. Little demons tussled and scuffled with each other-pulling hair, whining and kicking each other in the shins. Undaunted, “...Use your inside voice,” Mrs. Francie would say, but to no avail. Thus began our Christmas manger disaster.

A child’s Christmas is always magical -- twinkling lights, reindeer hooves, sugar cookies and snowy skies. On Christmas Eve of my fifth year, I was decked to the max. I donned my red velvet dress, lacy socks and black patent Mary Janes. Mommy scrubbed my face ‘til it was raw and brushed my teeth well for the first time since I polished off my Halloween candy.

Our family arrived at church shortly before the sun went down. Miraculously, Mom had kept me out of mud and mischief for a full hour. I stood in the cherub choir assembly line with thirty other wiggling, squiggling five-year-olds. In just a few short minutes, we would shuffle onstage and sing “Silent Night” in hushed tones around the manger.

Meanwhile, the mother-helpers gingerly grabbed the bratty kids first and shoved square white tablecloths over their heads. The trick was to wedge the little singers between the chair and the table while pinning the bows on at the collar. Red bows, some vertical, some horizontal and some resembling Boy Scout knots were hastily attached to each caroler.

Before we went onstage, Mrs. Francie, our fearless leader, cleverly bribed us. She promised that any child who sang without hair-pulling, hand-waving or booger-picking would be rewarded with a block of Christmas fudge following the concert. Such a reward would definitely motivate us to behave, but some of the moms wondered if they really wanted to take their little charges home hopped up on sugar and caffeine. Finally, all conceded that the show must go on. We lumbered onstage holding each other at the waist like a mini-conga line. Then, upon the director’s cue, we made a sharp right face and looked the congregation members square in the eye.

Mrs. Dudley, the organist, eagerly awaited her cue to charge through the intro to “Joy to the World.” Most organists love this hymn because it only uses one organ foot pedal. It’s tough to mess it up. Though outwardly pious-looking, Mrs. Dudley had a seedy side. She had been known to moonlight Saturday nights playing the organ at Richie’s Roller Rink.

Occasionally folks would see her weave in traffic in her Chevy because she indulged in too much of her homemade egg nog and rum cake. But what would you expect? Our Baptist pastor stole her from the Lutheran Church down the street when our old organist kicked the bucket. No one expected her to be a teetotaler. Sotted or not, Mrs. Dudley was the best in the business.

Before Mrs. Francie lifted her hand to give the first downbeat, I stopped to ponder. I glanced down at Freddie and Sara in their Mary and Joseph bathrobes. Ellen Stuffle claimed the Mary part because she still had all of her baby teeth. Always the prima donna, Ellen monopolized the toilet, constantly glopping on grown-up blush and lip gloss, and demanded a fresh towel headdress at every rehearsal. Freddie was the tallest tike in kindergarten, so he donned his paper beard with pride and tried to look fatherly. Unfortunately, Freddie had a short attention span, so he spent more time horsing around with Eddie the Donkey than paying attention to Baby Jesus.

My stocky shape made me a natural pick for livestock. Manger mammals were selected according to size: boys were camels and donkeys, girls were sheep and goats. Eddie, the class clown, was thrilled with his donkey role. He “hee-hawed” his way through the program in his most convincing Eeyore voice. My “baas” were better than my “bleats” so I played a barnyard sheep. I didn’t realize at the time that this was the worst possible role to play. Our furry sheep costumes were hot and itchy. After three sweaty rehearsals, my wet hair was plastered to my head and I reeked like a cow patty. Tilly Tingle clawed her way to the top to assume the starring role of Christmas angel. Angel auditions were cutthroat, so Tilly brown-nosed the teacher by clapping erasers in Sunday School and bribing Mrs. Francie with Christmas saltwater taffy. All of her efforts paid off. In the end, Tilly floated atop her cotton-ball cloud and warbled “Away in a Manger.” Stars like Ellen and Tilly had their own paparazzi. I remained content to “baa” in the background and blend into the sea of angel wannabes.

Baby Jesus was always a hit because He was pinky plastic with glassy blue eyes that almost seemed real. This Baby Jesus never cried or missed his cue. Mrs. Francie picked Eddie and Dicky to be shepherds because neither could carry a tune in a bucket. Ralphie, Todd and Buddy, the three kings, were imported from the first grade class. Mrs. Francie observed that they exuded self-importance and dignity. The kindergartners knew the truth. The only reason they seemed self-assured was because they beat up unsuspecting five-year-olds on the playground. That didn’t seem like “wise” behavior to me!

We ended our manger scene with “Hark the Herald.” Who was Harold, and why did we hark him? You had to use your imagination, but when our choir started “harking” our chubby faces shone with Christmas glory. Some of us would squeak out the high notes and others would sing during the rests, but Jesus in His love didn’t seem to care. He was just glad we wished Him a happy birthday.

I saw Christ in the faces of my Mom and Dad as they swelled with pride. I wondered at His glory in the candlelit manger. I felt His hope warm my heart. That Christmas Eve was the first time I experienced what big words like “come and worship” really meant!