Naked in the Pulpit

Naked in the Pulpit 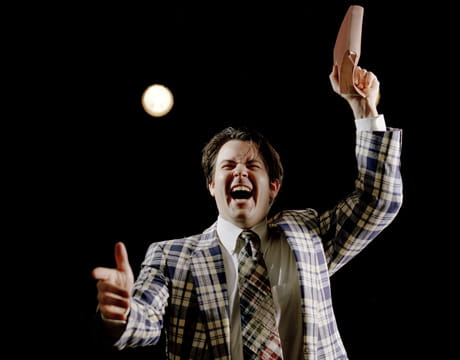 Many pastors have nightmares about being naked in the pulpit. My favorite cartoonist, Gary Larson, sketched a cartoon with a deer standing on two legs, a bullseye painted on his belly. His furry buck buddy commented, "Bummer of a birthmark!" Like Larson's paranoid charicature, pastors and wives often feel vulnerable and exposed, fearing their congregants will take advantage of their soft underbellies and shoot to kill.

The Barriers (my family) were definitely not a model pastor-family, and our youngest was quick to "bring down the house." Literally. Toddlers usually consider clothing to be optional. Bronwyn was no exception. In fact, she often spent her boundless energy running away from any adult attempting to cover her sweaty, plump little naked body. Once attired, my mischievous daughter took the most inopportune moments to disrobe-usually in a December snowstorm or in front of snooty Aunt Ivelle during the Thanksgiving dinner prayer.

Bronwyn was not nearly as modest as other "perfect" pastor’s children. One stifling summer Sunday morning my little fireball crawled up the carpeted stairs leading to the church pulpit with her bare behind glistening for the entire congregation to see. Evelyn Jones, the Women’s Missionary Union president, screamed “demon baby, demon baby!” and passed out in a heap upon Clinton Feemster, the head usher.

I rushed from my piano stool perch to hide Bronwyn's nakedness, but the church at large had already concluded that the new pastor-family tolerated nudity and had liberal Unitarian leanings. My precious Baptist baby had the annoying habit of removing her underpants any time they chafed or felt itchy. I was always the last person to learn of her shenanigans, and to save face as a good pastor’s wife, I sewed suspenders on her droopy drawers, praying she would not become a stripper when she turned twenty-one.

Most pastors feel naked in the pulpit, no matter how many sermons they preach. My husband has the recurring dream that he looks down in the middle of his sermon and discovers he is completely disrobed. He knows the pulpit hides a lot, but he can’t figure out how to get off stage to cover himself before he has to shake hands with awaiting members following the service. In reality, Roger and I have had very few wardrobe malfunctions: the occasional missed fly closure and a forgotten zipper on the side of my dress. I wouldn’t have been mortified, except I was conducting the orchestra at that time (thank God for petticoats)!

I believe every pastor family feels “naked” in church in one way or another. My big guy was terrified that he would misspeak a word in his sermon. One fateful Sunday morning, my preacher-husband Roger forcefully challenged the church to “…bring ye all the tithes into the whorehouse” after taking too much Nyquil for his sniffles. We received the biggest offering we had all year! More often, Roger was terrified he would reveal a chink in his armor, or offend some deacon with his take on predestination or pre-tribulation. Almost every pastor is frightened he will fall off the "pedestal" on which his congregants have placed him. His wife and children also fear their sinful bent will be evident to all.

How do ministers allay their fears of being exposed, of making mistakes? How do their families cope with "fishbowl living?"

Here are a few thoughts.

Lay all your cards on the table. Be honest. Remember that the longer you demonstrate love, vulnerability and integrity to your people, the more understanding they will become. You reap what you sow. You are building a foundation of mutual trust. Too many pastors fly the coup before they earn the trust of their people. Let them watch your life. No, your kids are not perfect, and neither are theirs. Your marriage needs work, and as you and your spouse sort through the nitty-gritty of relational challenges, you give hope to other couples along the way. Your honesty will help you relate to your flawed parishioners. That's why we all need God's grace and forgiveness.

Lower your expectations. The Taylor-Johnson temperament analysis test reveals that preachers usually score "perfect" on their exams. The truth is that the examiners call perfect scores the "Liar's Curve." Quite often, men of the cloth feel God expects them to be infallible. If you are a pastor, don't hide behind a facade of piety, and don't be disappointed with yourself when you can't or don't measure up. God loves you like you are, warts and all. Husbands, you will put your foot in your mouth at the church social. Wives, you will burn your chicken enchilada covered dish for Wednesday night supper. Pastor Hubby will lose his temper, get depressed and put his foot in his mouth at least once a week. If we do not recognize our feet of clay, we will remain miserable and defeated. Paul began his ministry boasting about his pedigree and his sufferings in 2 Corinthians 11:21-25. In 1 Timothy 1:15, Paul confessed, “Christ Jesus came into the world to save sinners”—and I’m the biggest sinner of all." The more spiritually mature you become, the more God will break you and mold you to be dependent upon Him.

Be humble before God and others. Confess your sins, and model contrition for your congregation to see. The most profound demonstration of humility and vulnerability Roger ever demonstrated was the Good Friday service where he confessed his sins before the congregation. The room was filled with crosses and nails. Each church member was encouraged to pray and confess his or her sins privately. Then they penned a list of those sins and brought their notes to one of the crosses we had placed around the worship center. Nailing those “sins” to the cross was a powerful picture symbolizing Christ’s suffering and dying in our place. When Roger knelt at the cross, he confessed his sins before God and the entire congregation. I was shocked to discover this was no token confession. He confessed his secret sins, his wicked thoughts, his tainted motives and the darkest parts of his heart. The room was silent. Then God showed up. It was if the Holy Spirit blew into the room and deposited the glory of God everywhere. The Father’s presence was palpable. I’ll never forget it.

I will also never forget the lesson I learned that day. God is not afraid of our nakedness. He is not surprised by our sin or weakness. We don’t need to cover ourselves to hide our iniquity like Adam and Eve. We can face our Father and others unashamed and unafraid as God intended, covered with the blood and righteousness of Jesus. God will bless us for it. And our people will love us for it.