She Called My Husband a Pervert: He Called Him a Devil

She Called My Husband a Pervert: He Called Him a Devil 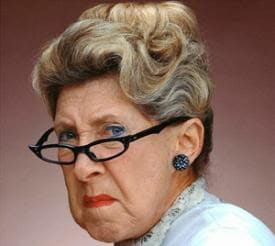 Unbelievable! A disgruntled nursery worker penned a libelous letter to every minister in Tucson. She charged that Roger, my husband and newly appointed pastor of Casas Church, had been seducing innocent teenage girls in our youth group. It was overt, libelous slander.

We received a phone call one Saturday night from a preacher across town. He read Roger the poison pen letter and my husband’s ruddy face turned white as a sheet. Why did this woman want to destroy my 24-yr-old husband’s ministry? What was her deal? More Pampers? Fancier cribs? This gal had serious anger issues.

A fresh-faced newbie newly arrived to his first pastorate, Roger hadn’t had time to offend the old guard, much less identify who they were. Thank God, Roger’s local pastor peers knew the claims were baseless. He had NEVER been alone with a girl-not even to drive a fresh-faced teen home from baby-sitting our daughter Brianna.

We sat on our ratty orange couch, speechless and shocked. The only rational answer we could deduce for such a slanderous statement was this woman’s disappointment in Roger’s appointment. Roger was the pastor candidate chosen to replace her beloved Dr. Lott. Dr. Lott, a stately retired lawyer, founded Casas Church when he was seventy years old. He retired and left the pulpit at seventy-five.

The pulpit committee called us. The vote was 92 to 1. Guess who the “1” was? Crankypants herself.  “How could a curly-headed whippersnapper fifty years Dr. Lott’s junior possibly do the job?” she said. I can understand her grief in the loss of her leader and mentor, but why would she try to sabotage us so cruelly?

“What are we going to do?’ I tearfully asked my husband.

“Now is just about the time most guys do something stupid,” he wisely answered. “They resign, paranoid and discouraged, or they get out their ‘gospel gun’ and try to defend themselves from the pulpit. The problem is that 75% of the congregation have absolutely no idea the allegation has been made.”

“If you bring it up, you start the rumor mill?” I asked. I wasn’t feeling any better about the situation.

I thought he was crazy.

Destructive slander: How do you survive it?

1. Consider the source.“Whoever conceals hatred with lying lips and spreads slander is a fool.” Proverbs 10:18 KJV

2. Don’t respond in kind.“We work hard with our own hands. When we are cursed, we bless; when we are persecuted, we endure it; when we are slandered, we answer kindly.” 1 Corinthians 4:12-13 NIV

Allow God to be your defender. Answer anyone who questions you about the allegation honestly and without venom. Live a blameless life. Don’t give anyone a reason to doubt your integrity.

We were deeply wounded. Processing such hate speech took a lot of time and prayer. If you have been slandered, don’t be in a hurry to heal. Let God do His work of grace and forgiveness in your heart.

Our church was bursting at the seams. My hubby was thrilled! He was so eager to reach people for Christ, yet he tired of preaching five services on the weekend. Parking places were non-existent. Visitors often circled and left because there was no place to “land.” Something must be done. We couldn’t expand our current property. We were land-locked.

The Wednesday evening elder meeting dragged on for hours as re-locating our site was discussed.

Here’s a factoid you might not know. According to Roger’s seminary professor, three people exist in every congregation. 1) The real pastor. 2) The guy who thinks he’s the pastor. 3) The guy who wants to be pastor.

Our number three, the guy who wanted to be pastor, was not happy about any ideas proposed in the meeting. Steam emitted from his collar and the clock on the wall kept ticking. The royal roundtable of elders chomped their potato chips and slogged through the pros and cons of contractors, building campaigns and possible relocation sites.

“Brother Number Three” leapt from his chair, marched around the large round table where knights (church leaders) were ensconced. He postured himself directly behind Roger’s back, pointed his right index finger squarely at Roger’s wavy scalp. (Rog had more hair back then…) My husband couldn’t turn around because the irate brother had him penned between his rolling chair and the table. He was hulking over him, his hot breath on Roger’s neck. Now that's back-stabbing at its best!

“This young buck is leading us over the precipice of hell,” he shrieked. “Spiritual churches are all about people and they should take care of their own. Only power-hungry faith mongers push their leadership to build soulless mega-churches!”

The room fell silent. The rest of the elders squirmed uncomfortably, staring at their shoelaces and wondering how Rog would respond.

What was he to say? He was exhausted, and multi-site, or satellite services were not an option at that time. Were there financial risks? Yes. Would the climate of the church change if we had a larger building? Of course. But instead of discussing the issues calmly and carefully, this brother completely lost his cool-and his kindness.

Roger was humiliated and speechless. Should he defend himself? Should he change the subject? Then something amazing happened. In the midst of all the chaos, God quietly spoke to him with a short verse from Proverbs. “A person’s wisdom yields patience; it is to one’s glory to overlook an offense.” Proverbs 19:11 NIV

“My son,” God quietly whispered, “Don’t retaliate in anger. I want you to be kind to this man. Put aside your feelings for the moment and be patient.” Roger sighed a sigh of relief. Now that was something he could do. He thanked the man for his words, acknowledged that there was much of the plan that still needed to be processed and closed in prayer.

As Roger dejectedly ambled to his Chevy, he felt this overwhelming peace come over him. “God, get glory. God, get glory…” he chanted over and over again. With a heap of pastor-patience and time for relationship repair, the disgruntled layman came around. And Roger learned to navigate the waters of change carefully and considerately.

I am not saying you can roll over and play dead when you are criticized. But the difference in covert criticism and overt slander is that slander implies the allegations are completely untrue. Truth can be learned from criticism, especially if it is offered by someone you respect. A great leader persistently and courageously casts vision, but carefully considers the words of a critic.

How do you handle criticism?

1. Listen carefully and humbly to your critic. Not everyone sees from the same perspective.“To answer before listening, that is folly and shame.” Proverbs 18:13 NIV

2. Evaluate the critical words carefully. If the criticism is true, make appropriate changes. If not, ignore it! “Whoever disregards discipline comes to poverty and shame, but whoever heeds correction is honored.” Proverbs 13:18 NIV

Nasty, nasty words! Don’t dole them out. Don’t let them make you bitter. Don’t retaliate in kind. Be loving and process your pain. Pray for your enemies, and forgive them.

I have been the pastor's wife in our church my entire adult life. I’ve probably offended everybody at least once. And they have gotten under my skin a time or two. Don't let unkind words rob you of your joy. Jesus will sow the seed of compassion in your heart, and develop His character in you.