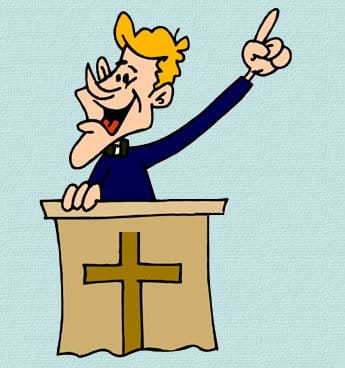 How does a pastor’s wife assist her husband in sermon prep? Does she take a hands-on approach? Does she pray and support him from the sidelines? Or does she slide into the pew just after the offertory and hope for the best? Every pastor and spouse are different. He’s our story.

My father-in-law told his aspiring preacher-son that every sermon needed a “hooker.” He wasn’t referring to a woman of ill repute. Papa Roger was instilling in his son the value of using an opening sermon story to captivate and disarm the congregation and to prepare them for the Bible teaching to follow.

Some pastors are jokesters, loving to wake the sleepy caffeine-deficient pew sheep with a rousing, knee-slapping anecdote. Other, more erudite pulpiteers use historical or statistical data to challenge the congregants. Snorefest. Save the stats for the meatier portions of the passage when we are already paying attention. Pop culture references are great until the speaker tries to recycle his “sugar stick” (best) sermons at a later date, or post them on the internet. Ten years later, nobody cares if Jessica Simpson and Nick Lachey were married. That’s so “last season.” Pastor plagiarizers Google sermonstosteal.com and copy and paste someone else’s hard work. The worst sermonator of all is the unprepared one. He confesses to the congregation that he doesn’t need to be prepared. God will give him the words on the spot. I call this suppository preaching.

Opening “hookers” using your family as fodder do not come without a price. When our eldest daughter turned four, I brought her to big church for the first time. Daddy opened his message describing one of her adorable antics. Brie, our daughter, was mortified. She hid under her chair in the fetal position for the rest of the service. After comforting our little girl and placating her with a huge dip of Rocky Road ice cream, our daughter grudging forgave her Daddy. But he learned an important lesson that day about protecting his family’s privacy. Our ingenious education director gave Roger a brilliant idea: every family illustration required prior permission and a price tag. If the story was highly personal or embarrassing, the reward for using said story was a dress (we had two daughters and a dog). Even Becky, our border collie, got a bone for her trouble. After being in the ministry for years, Roger owes me a Ferrari and a trip to Madagascar for all the fresh fodder he gleaned from me. “Vengeance is mine, saith me” (1 Julie 2:14). Over the course of two decades, Roger and I continue to team-teach conferences. Now the shoe is on the other foot. I relish unearthing his foibles and quirks as well. We call it a draw. No Ferrari! Nuts!

I hold my husband in the highest esteem because Sunday after Sunday, come hell or high water, he studied his brains out, prayed earnestly and preached faithfully. His listeners never dined on fast food, they dined on gourmet fare meticulously prepared week after week after week. Three thousand sermons later (not counting conferences and multitudinous multiple services) I can count his re-runs on one hand.

Sermonation is a highly personal process. All pastors need support to preach, but they need it in different ways. How can you best partner with your spouse to help them succeed in this challenging role?

Ask him what he needs. Many pastors need monastic solitude and silence to hear from God, while others are multi-taskers. One pastor I know holes up I his study on “sacred Saturdays.” He must not be interrupted, needs an ordered household and quiet children to facilitate his creative process. (Yeah, right -- like that will ever happen). If all else fails, dear wife, send him up to church or the public library. Often younger preachers require bustling activity and multi-tasking to do their best work. Their most inspired messages are birthed at Starbucks swilling grande frappuccinos, hooked up to their iPods or iPads, tweeting, texting and Facebooking between paragraphs. Lest you chide them for this creative process, remember Mozart played billiards to help him write a symphony. He occupied his left brain so that his right brain was free to create. As a musician, my best creative work is often done while driving. This can prove hazardous.

2. Help your hubby sermonize if he requests your assistance (and only if he requests it). Roger was taught by his parents to solicit all of the preaching advice he could get. Called to preach at seven, he first sermonated at the ripe old age of 13, pimply-faced and sweating through his suit. It was youth Sunday and his pastor needed some unsuspecting teenager to preach. Roger got the job. To prepare for his first foray into “preacher-land,” his mom and dad didn’t want him to fail. His mother purchased a book entitled 1001 Snappy Sermon Starters and chose the chapter entitled “A Determined Decision.” He plunked out every word on his clunky Remington typewriter and memorized it cold. Helen, his overly zealous mom, wanted her boy to knock that sermon right out of the park. So she placed notes in the text like pause here, right hand gesture here. His sermon was a hit. He’s been preaching ever since.

Roger and I are a teaching and writing team. For years, we examined his chosen Bible passage, shared our individual observations and applications, and researched possible illustrations and conclusions. Left-brained Roger was the theologian and the Hebrew/Greek specialist. He carefully, methodically searched for each nugget of truth and outlined his thoughts with clarity to produce a well-conceived illustration. My contributions were funny, fluffy, outside-the-box thinking. As a pastor’s wife, I really wanted to hold my ideas loosely and allow Roger to be discriminating about my contributions or lack thereof. More than once we have gone toe-to-toe on which way a sermon should go. Bad idea. REALLY bad idea on my part.

3. Don’t criticize your husband’s sermon immediately after he preaches it. When you are polishing off your pecan pie at Sunday lunch (yum) and he asks that very vulnerable question: “Honey, how was it?" Be tactful. Remember, he isn’t brutally honest when you ask him if your blue jeans make you look fat. He never says “Wide Load.” Sunday afternoons are tough for preachers. Pastors are both exhausted and exhilarated. Stay away from phrases like, “I’ll know you’ll do better next time!” or “Has that other pulpit committee called you back yet?” These are not helpful. Have a positive word on the tip of your tongue to encourage him. If you do have constructive criticism to give, offer it mid-week and start with encouraging feedback. Most importantly, let him know you believe in him and respect him. Your love for him should not be based upon his church size, financial provision or job performance. Love him as he is and he will adore you for it.

4. Pray for your pastor-husband. He needs it. Every day. All the time. Get in the trenches of his spiritual battles and hold onto God. Delivering God’s Word is like giving birth. Isaiah traversed the dusty streets buck-naked for three years to warn the Egyptians of His upcoming judgment on their proud nation. Ezekiel had to bake his bread on cow-patties to get God’s message across. Eww… Teenage Jeremiah was pitched into a cistern, and Hosea had to marry a prostitute to convey God’s grief over Israel’s infidelity.

The mantle worn by God’s messenger is heavy. Put your arm around your Sermonator and hold him close.