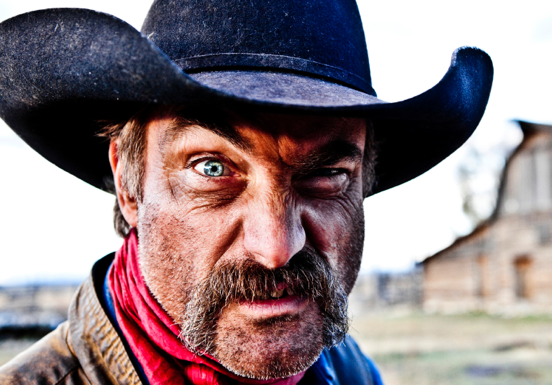 Toe to toe. Nose to nose. Two honr’y gospel gunslingers, giants in the new Christian faith, faced off over John Mark, the Kid. Their biting, sharp words stung and scarred these two gutsy preachers. Paul and Barnabas were the big guns that launched Christianity throughout Asia Minor. After their nasty split, they never teamed up again. (Acts 15:36-41).

Young John Mark, Barnabas’ cousin (Colossians 4:10) tagged along on Paul's first missionary journey. When the going got tough, Mark wimped out and headed back to Jerusalem. Lions, tigers & bears, oh my! Perga, on the Pamphylian coast, was known for its unhealthy climate and marshes, and the trio did not hang around for long. John Mark ran home to Mama in Jerusalem, while Barnabas and Paul moseyed up the grueling trek northward into the Pisidian highlands to Antioch. These badlands beyond the western edge of the Taurus Mountains were nasty, often filled with banditos. Crusty Paul thought John Mark was a weakling who deserted the duo in their hour of greatest need.

Looking back, the old preacher scrawled his memories about segments of this journey when he described dangers he fought while traveling (for example, 2 Cor. 11:26, “danger from rivers, danger from robbers, … danger in the wilderness”). Even when Barnabas Cassidy and Sundance Saul preached in Antioch, Paul found such intense Jewish opposition to the gospel that he determined to turn his message toward the Gentiles (Acts 13:46).

Paul and Barnabas’ famous spat in Acts 15:36-41 is legendary. How could these two great men of God split up? Didn’t it hurt the ministry and the testimony of the early church?

Time passed. Barnabas wanted to give his kin a second chance to join Paul on his second missionary journey. The roughshod evangelist would not hear of it! Years earlier, it was Barnabas (whose name means “encourager”) that convinced the Christians at the First Baptist Church of Jerusalem to accept slimy Saul of Tarsus, the known Jewish assassin, as a genuine believer (Acts 9:26). Did Paul fail to remember that he once needed grace as well?

Barnabas took John Mark under his wing and continued to minister to the churches. Big-hearted Barney didn’t give up on his cousin. Though he was a slow-starter, Barney’s encouragement paid off. John Mark wrote the gritty New Testament gospel of Mark. Most Bible scholars consider it to be the first of the four gospels. This page-turner is an action-packed, powerful picture of Jesus’ ministry. After John Mark’s stint with his cousin, the boy grew into a man. Mark, a bigger, braver preacher, became a part of the Apostle Peter's powerful posse for awhile. History records that John Mark is the one who took Christianity to Egypt and started churches there.

Years later, old Paul finds the formerly worthless Mark “useful,” as revealed in the apostle’s concluding epistle. “Get Mark and bring him with you, for he is useful to me for ministering” (2 Timothy 4:11). Most people look at the “parting of the ways” between these two great Christian leaders as a falling out that grieved God and hurt the ministry. Instead, the ministry of the two great preachers was multiplied. Paul took Silas on his second missionary journey, and remarkable young Timothy joined them in Lystra.

Sometimes even the most mature Christians will disagree. Don’t become disillusioned. Don’t quit. Be a peacemaker. Look at the big picture. Keep focused on doing the will of Christ. Paul and Barnabas didn’t let their “parting of the ways” deter their ministries. As a result, perhaps even more work was accomplished for the Lord in spite of the fight.

Do you know someone who needs a second chance? You can be a Barnabas today! Give grace, acceptance and forgiveness and see what God will do.

="width: 125px;" class="fr-fic fr-dii fr-fil">Dr. Julie Barrier, along with her pastor-husband, Dr. Roger Barrier, have taught conferences on marriage and ministry in 35 countries. The Barriers are founders and directors of Preach It, Teach It providing free resources in 10 languages to 5 million visitors in 229 countries and territories. The Barriers pastored 35 years at Casas Church in Arizona, Julie has served as a worship minister, concert artist and adjunct professor at Golden Gate Baptist Theological Seminary. She has authored or composed of over 500 published works.