Bethphage: A Donkey for Jesus

Bethphage: A Donkey for Jesus 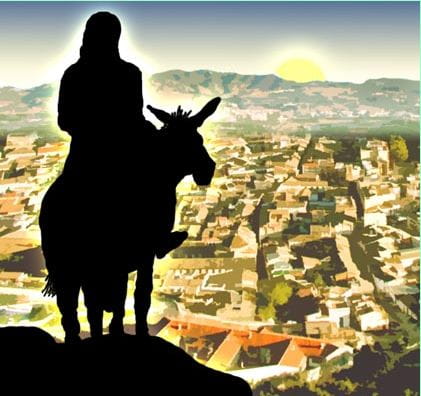 “They brought the donkey and the colt; then they laid their robes on them, and he sat on them” (Matthew 21:7).

The story of Palm Sunday really begins with a donkey. Most of us have heard how Jesus sent his disciples to the village of Bethphage with instructions to bring back a donkey. When you read Matthew’s account, you realize that the two disciples actually brought back two donkeys–a mother and her young colt that had never been ridden. Jesus rides into Jerusalem on the young colt with the mother walking alongside.

Matthew also tells us that by riding a donkey into Jerusalem Jesus was fulfilling an ancient prophecy from Zechariah 9:9. Those words–written 575 years earlier–predicted that when the Messiah came to Israel, he would come riding on a donkey.

“Rejoice greatly, O Daughter of Zion!  Shout, Daughter of Jerusalem!  See, your King comes to you, righteous and having salvation, gentle and riding on a donkey” (v. 5).

Nothing would have seemed more unlikely than for a king to come riding on a donkey. Jesus could hardly have chosen a more unlikely way to present himself to the nation. It’s not hard to imagine the Romans laughing as they watched the spectacle. A pauper king, riding on a borrowed donkey, his saddle a makeshift layer of cloaks, attended by an unruly mob whose only weapons were palm branches.

On Palm Sunday we worship the One whose kingdom is not of this world, who offered himself to his people while riding on a borrowed donkey. The hymn “From Bethany, The Master” says it well:

The King of Love, in triumph
Rides through the city’s gate;
Rejected, scorned—yet Victor,
The Conqueror of hate;

O wave your green palm branches!
Exalt His matchless worth!
This King of Love shall conquer
The nations of the earth.

Lord Jesus, you knew fully the pain of our rejection. You came as a king, but we would not have you. Grant that we might follow you to the cross and count it all joy for your sake. Amen.