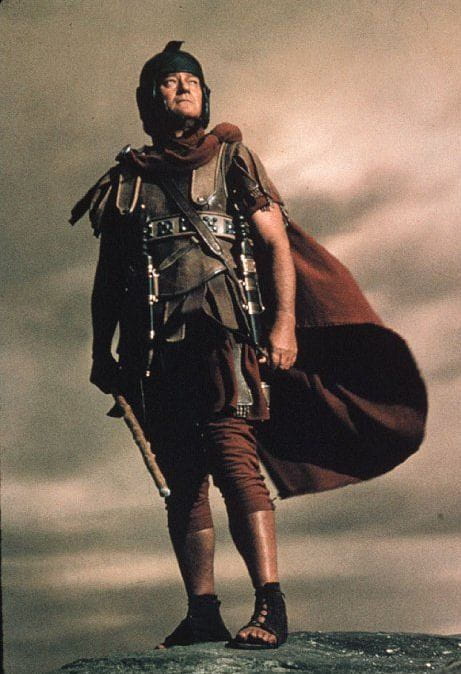 John Wayne as the centurion

What do the centurion and John Wayne have in common?

When the Biblical epic The Greatest Story Ever Told was released in 1965, John Wayne made a cameo appearance as the centurion who watched Jesus die. He had exactly one line: “Truly this man was the Son of God. When you watch the film, you hear the Duke’s unmistakable voice utter those words.

While it wasn’t his most famous role, it was a good one nonetheless because the centurion played a key part in the death of Christ. As the leader of a Roman “century” of 100 men, he was an officer held in high esteem. He had to be a man of good character, with a proven military record, who knew how to carry out orders promptly. He had to be an expert with the sword and with all other weapons.

This means the centurion wasn’t just any soldier.
He was a proven leader of men.

Did he know the other centurion whose servant Jesus healed (Luke 7:1-10)? It’s entirely possible because Roman officers in a small region like Galilee and Judea would no doubt cross paths. If they knew each other, then this centurion would already have a favorable impression of Jesus. Certainly he would know that Pilate had three times declared Jesus innocent of any crimes, and he would wonder why he was being crucified. He must have heard Jesus say, “Father, forgive them for they do not know what they are doing.” He heard him promise heaven to the penitent thief. He witnessed the darkness that fell on the earth, and he heard Jesus cry out, “It is finished!” More than that, unlike the usual criminals who died in agony screaming bitter oaths, Jesus died quietly as he yielded his spirit to his Father in heaven. Mark 15:39 tells us that he stood facing Jesus and saw how Jesus died. All of that must have made a huge impression on the centurion. Finally, he felt the earthquake that split the rocks in two. Taken together, he came to a conclusion that could only have come from the Holy Spirit, “Truly this man was the Son of God!”

They were all wrong about Jesus.
The centurion got it right.

Someone asked me recently why we call this day “Good Friday.” In earlier generations it was called “Long Friday” or “Black Friday” or “Holy Friday.” Many people think “Good Friday” is a shortened version of “God’s Friday,” meaning that out of the unspeakable suffering of Christ, God accomplished the ultimate good in making salvation available to the whole world.

The centurion somehow saw through the blood and gore and the smell of death that hovered over Golgotha. A Roman soldier figured out what the priests and the politicians missed altogether. They saw a radical, a mystic, a troublemaker. But the centurion saw the Son of God.

On this Good Friday, let us take our stand with him and say for all the world to hear: “Truly this man was the Son of God!”

Heavenly Father, today we behold our Lord nailed to a cross. From his scarred visage a light shines that death cannot destroy. Glory to Jesus forever, the mighty Son of God! Amen.