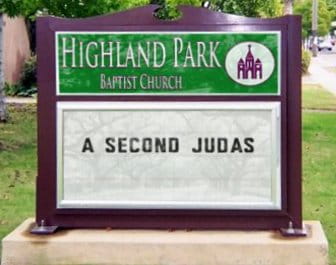 “While I was with them, I protected them and kept them safe by that name you gave me. None has been lost except the one doomed to destruction so that Scripture would be fulfilled” (John 17:12).

Where is Judas today?

Acts 1:25 says that Judas left his apostolic ministry “to go where he belongs.” Literally, the verse reads “to go to his own place.” That gives us our starting point. Judas is in hell today. He has been there for 2,000 years and he will be there forever. He has paid the ultimate price for the crime of betraying the Son of God.

If Judas were alive today, the best place to find him would be in church on Sunday morning. He would come early, sit near the front, sing the hymns with gusto, clap during the choruses, and say Amen during the sermon. He was that kind of man. Who knows? He might be sitting next to you in the pew. Or he might even be closer than that.

Many years ago I heard an evangelist preach a sermon with the arresting title: “A Second Judas.” It was aimed at church members who were not truly born again. He told the story of Judas and then talked about himself. He grew up in the church, attended Sunday School for years, and went to a Christian college. He even become a pastor before he realized that he had never truly been born again. He himself had been a second Judas. It was humbling and painful for him to face the fact of his own self-deception, but when he did, he was wonderfully converted by the Spirit of God.

Judas does us a favor if his story causes us to rethink our basic commitment to Jesus Christ. You call yourself a Christian. But are you a true follower or are you just going through the motions? Are you a pretender or a true believer? Have you truly turned from your sins and trusted Jesus Christ as Savior? Are you a fair-weather friend of the Savior?

At the Last Supper when Jesus predicted his betrayal, the disciples were baffled and started to say, “Lord, is it I?” Don’t take anything for granted, but throw yourself on God’s mercy lest you too end up being a second Judas.

Lord God, free us from unnecessary fear and from foolish presumption. Grant us simple faith to believe in Jesus. May we look not to ourselves but to Christ alone for our salvation. Amen.