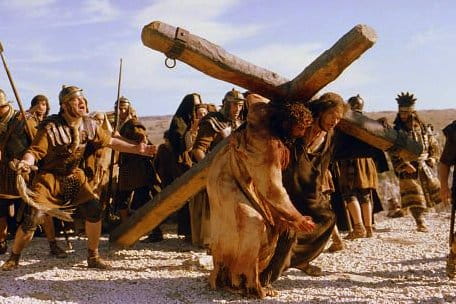 “As the soldiers led him away, they seized Simon from Cyrene, who was on his way in from the country, and put the cross on him and made him carry it behind Jesus” (Luke 23:26).

We don’t know much about him.

He was just a bit player in the great drama surrounding the death of Christ. For a brief moment, he steps on the stage, plays his part, and then leaves, never to be mentioned again in the Bible.

We know his name: Simon.
We know where he lived: Cyrene, a city in northern Libya, not far from the Mediterranean Sea, about 115 miles east of Benghazi.

We also know that he had two sons: Alexander and Rufus.

Evidently he was a Jew who had come a long distance to be in Jerusalem for the Passover. On this particular Friday morning, he was part of the great throng of people milling around the narrow streets going to and from the Temple. It shouldn’t surprise us that a Jew from Cyrene was there. Acts 2:10 says that on the Day of Pentecost there were Jews in Jerusalem from “the part of Libya belonging to Cyrene,” and Acts 6:9 mentions the synagogue of the Cyrenians. Evidently a small colony of people from Cyrene made their permanent residence in Jerusalem. Others (perhaps Simon is among them) would have journeyed from Cyrene to observe Passover. All of this suggests that it wasn’t unusual for a man like Simon to be in Jerusalem at a time like this.

We don’t know how much he knew about Jesus. There would be no reason a man from Cyrene would have heard of this upstart rabbi from Nazareth before coming to Jerusalem. Perhaps he had heard about him and knew something of the controversy surrounding him. It’s entirely possible that he had heard that Jesus had come riding into the city on a donkey the previous Sunday and that great crowds of people had welcomed him.

Why Would Anyone Kill Jesus?

Rumors swirled like wildfire in the crowded confines of the ancient walled city. So it is not impossible that he had heard people talk about Jesus in the days leading up to this particular Friday. Perhaps he had heard about certain miracles Jesus had performed and how some of his followers believed him to be the long-awaited Messiah. But if he had heard that, he would also have heard other rumors, dark things about Jesus and his background, his questionable pedigree, and his run-ins with the scribes and Pharisees. That too was common knowledge in Jerusalem.

One can easily imagine that Simon from Cyrene knew something about Jesus. We can also suppose that he had no fixed or firm opinions about this man. It would be clear enough to an outsider that some loved him, some hated him, and many were perplexed by the controversy swirling around him.

But one question hung in the air.
Why would anyone kill a man like Jesus?