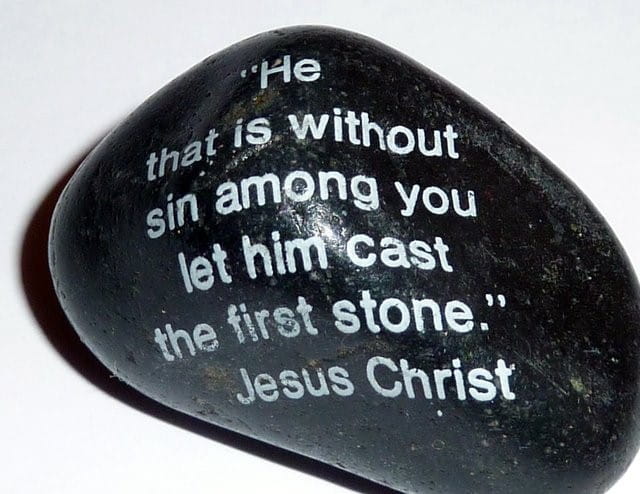 “But Jesus bent down and started to write on the ground with his finger. When they kept on questioning him, he straightened up and said to them, ‘If any one of you is without sin, let him be the first to throw a stone at her’” (John 8:6-7).

No one knows what Jesus wrote on the ground.

There are times in reading the Bible when we wish we had a little bit more information. What did Jesus write when he stooped twice to write on the ground with his finger? After all the speculation is over, we simply don’t know the answer. Evidently what he wrote isn’t crucial or we would have been told what it was. The word for “write” is only used here in the New Testament and can mean something like “doodle” or it can mean to make a list. Some have thought he wrote the Ten Commandments to remind the men of their sins. Others have suggested he wrote the names of the accusers by the Commandments they had broken: “Sam—Adultery,” “Joe—Murder,” “Jacob—Coveting,” and so on. More than one writer has suggested that he wrote in the dust the names of their girlfriends. This last suggestion has the advantage of explaining why they cleared the area so quickly.

Jesus’ words are meant to remind them of the seriousness of their charges. Motives matter. In essence he is saying, “Before you pick up that stone, take a good look in the mirror. Make sure you are morally qualified to put this woman to death. Make sure there is no malice, no deceit, no trickery, no dishonesty, and make sure you are not guilty of the same crime yourself.” He is reminding them that if they testify maliciously or deceitfully, they are signing their own death warrant.

There is much more in this story, but let’s content ourselves with one simple thought.

Before you pick up the stone, look in the mirror. Before you condemn, do some confessing of your own sin. The world would be a better place if we cleared our own conscience before we start throwing stones.

Lord Jesus, show me the truth about myself so that I can deal honestly with my sin before I dare to examine the sins of others. Amen.