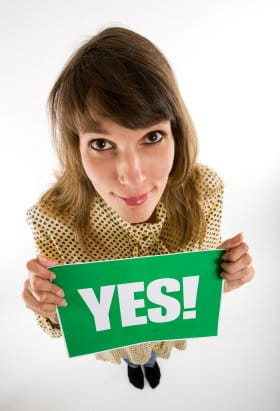 Let’s not underestimate what it cost Mary to say Yes to God. From that moment on, she faced the incredulity of her friends (“Oh Mary, how could expect us to believe such a bizarre story?”), the scurrilous gossip of the neighborhood and the whispers of promiscuity that have lasted 2,000 years.

Mary knew-or would soon realize-that saying Yes to God meant misunderstanding and public shame. Gone was her pure reputation and with it her dreams of a quiet, happy life in Nazareth. In the future her life would many times be happy, but it would never again be quiet.

Since we know the end of the story, we may tend to overlook the possibility of divorce. But Mary had no way of knowing how Joseph would respond to her pregnancy. Would he blow his top and walk out on her? Would he humiliate her publicly? Would he divorce her?

As it turned out, Mary had every reason to worry about Joseph. He didn’t blow his top or try to humiliate her, but he did intend to divorce her. Only an angel’s intervention kept that from happening.

That, too, was on Mary’s mind. By saying “Yes’, she risked losing the man she loved. Her whole future was on the line.

All these things were just the beginning. Mary could not know what the future would hold. Before it was all over, she would experience heartache, opposition, slander, confusion, anguish, despair and loneliness. In the end she would face the greatest pain a mother can endure when she watched her son die on the cross (John 19:25).

Mary couldn’t know all those things. Perhaps if she had known, she might not have said “Yes." But it’s just as well that she didn’t. Sometimes we say, “I wish I knew what the future holds for me.” But you really don’t want to know. It’s far better that we don’t know what life will bring us in 10 or 15 years.

Mary didn’t know the full cost of saying “Yes." But having made her decision she never looked back. Those two aspects of her life may be the greatest things we can say about her:

1. She believed God when it seemed to be impossible.
2. She never looked back.

God said, “Are you willing to believe the impossible?"
Mary answered, “Yes I am!"
Without that “Yes”, there would be no Christmas.

Loving Lord, thank you for Mary’s godly example. May I be ready to say Yes when you call me to trust you. Amen.