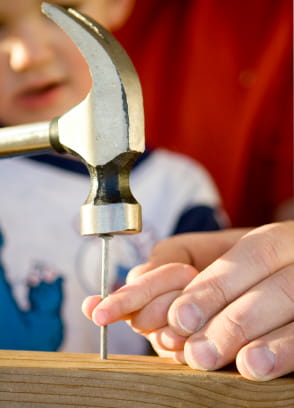 Who did Jesus think he was?

Jesus didn’t fit into their small town way of thinking. He was just the “carpenter’s son.” On the good side that meant that Jesus had an earthly father as far as his neighbors were concerned. It also means that Jesus grew up in a blue collar home. He wasn’t born with a silver spoon in his mouth. No doubt Joseph taught Jesus how spot a good piece of wood, how to measure it properly, how to make a good cut. I’m sure Jesus spent many hours learning at his father’s side. He knew what it was like to be raised in a poor family. It prepared him for later years when his message would spread like wildfire among the common people of Israel. They loved him because he was one of them.

But his neighbors had no use for him.
They had him in the “Nazareth box,” but he wouldn’t stay there.

People still have problems with Jesus today. They like him as a teacher or a moral example. They are pleased to put him in the pantheon of great religious leaders. They may even say that he was a prophet of God.

The Bible never presents us with a “cafeteria Jesus” whereby we can take his teachings but deny his miracles or accept his death but deny his resurrection. We must not say, “I will learn from him, but I will not worship him.”

The final tragedy is to know Jesus so well that you don’t know him at all. We must not make that mistake or we will be as guilty as the people of Nazareth who did not know that they had lived next door to the Savior of the world.

Open my eyes, Lord, to see you as you are, my Savior and my God. Grant me faith to believe, a heart to obey, and a ready voice to tell others about you. Amen.