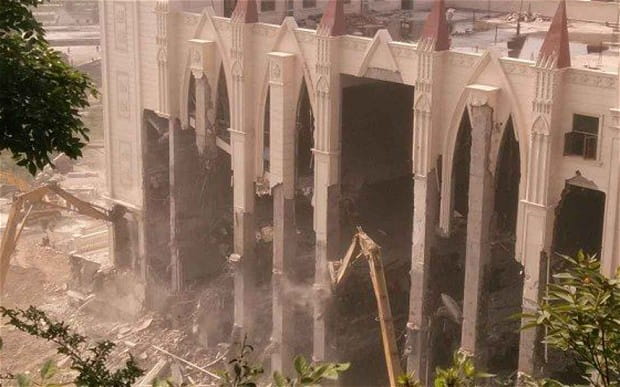 Chinese church being demolished by government. Source: The Telegraph

China continues to puzzle many people.

The news from that part of the world is both good and not-go-good.

First, the good news. A recent article predicted that China will become the world’s most Christian nation within 15 years. By 2030 there could be more churchgoers in China than in America. This is partly a function of size. With a population of 1.35 billion, China more than quadruples the US population of 318 million. One expert says that China’s Christian population could top 247 million in 2030.

It is a great miracle of God.

Now for the bad news. This week authorities in China demolished a massive church in the coastal city of Wenzhou. You may have read about a human chain of Christians that surrounded the church a few weeks ago to protect it from destruction. But you can’t do that indefinitely. Thinking a compromise had been reached, the human chain disbanded. But the bulldozers (and the armed guards) arrived in force early Monday morning and began the grim business of demolishing a place of Christian worship.

This seems like a deliberate attempt to intimidate Chinese Christians and to stop the rapid spread of Christianity in China.

Joann Pittman has a helpful note about China possibly becoming the most Christian nation. (She also has a good analysis of the church demolition.) At the end of her article she tells of going with some friends to visit a church in the Sichuan province in central China. When they met the pastor, he asked if they could translate an inscription on the bell that had English writing on it. What they found was a giant cast iron bell with these words inscribed on it:

Somehow the bell had made its way from the foundry in Ohio to the church in Kansas and then all the way across the Pacific Ocean to the church in Sichuan. Here is the story in her own words:

After recovering from shock and finding out a bit more about the bell, I asked the pastor how it was that the bell had survived the Great Leap Forward, a political campaign during which Chinese were instructed to melt down all metal in their possession and turn it over to the government.

The same can be said of the church in China!

That’s a good perspective to keep in mind as we consider what God is doing in China today. The Chinese church is growing explosively. The authorities feel threatened so they tear down a huge church building. But it will not stop God’s work. Jesus made a promise that applies here:

"I will build my church, and the gates of hell will not prevail against it” (Matthew 16:18).

Our thoughts and prayers go out to the members of the church in Wenzhou. They lost a building, but they didn’t lose their church. That’s one thing the government can’t take away from them.