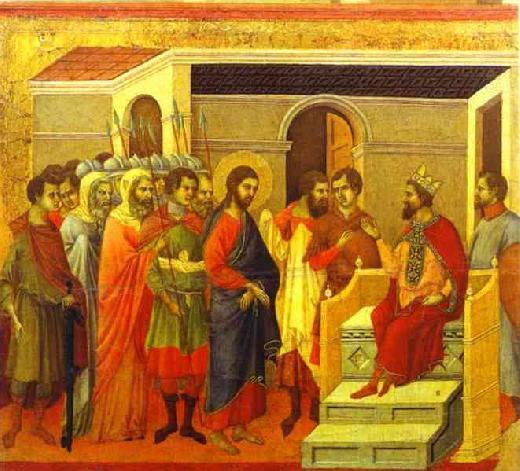 It is now early on Good Friday. Jesus was arrested by the Jews sometime around midnight. Since then he has been taken from one hearing to another: Annas, Caiaphas, the Sanhedrin. They all had their shot at him. Along the way, he has endured mocking jokes, insults, and false accusations. The Jews want him dead but only the Romans have the power of capital punishment. Thus he ends up before Pontius Pilate, the governor of Judea. Pilate is a Roman appointee who has little understanding of the Jews and their religion. His main task is collecting taxes and keeping the peace. When Jesus is brought before him, a cursory examination reveals nothing that would justify the death penalty. When he hears that Jesus is from Galilee, he spies a way out of the jam. Since Herod handled matters in Galilee, and since he happened to be in Jerusalem that week, he would send Jesus to Herod and let him handle this messy problem.

Now at last Herod meets Jesus. But it didn’t work out the way he had expected. “When Herod saw Jesus, he was greatly pleased, because for a long time he had been wanting to see him. From what he had heard about him, he hoped to see him perform some miracle. He plied him with many questions, but Jesus gave him no answer” (Luke 23:8-9). He is “greatly pleased” because he thinks Jesus is going to work a miracle (or two or three) for him. “Jesus, I heard you can turn water into wine. Here’s a basin of water. Show us your magic.” “They say you can walk on water. How about walking across the pool in my backyard?” On and on it went, Herod firing one question after another at Jesus. He is curious, yes, but he is not a seeker of truth. Herod is nothing but a thrill seeker. I am sure he was shocked and then chagrined when Jesus refused to speak to him. No one ever treated him like that. And the chagrin turned to embarrassment and eventually to anger.

There are times in life when silence speaks louder than words. This is one of those occasions. Jesus knew that Herod was trifling with him and that his questions did not come from an honest heart. He saw no reason to answer, and so he “opened not his mouth.”

When Herod killed John the Baptist, he murdered his own soul. He lost the ability to hear the voice of Jesus. There was nothing Jesus could say that would have made the slightest difference in that situation. By his silence Jesus is saying, “You didn’t want to hear the truth when John spoke. You said no. Now you will never hear the truth again. I accept your answer of no.”

Light received leads to more light. Light rejected leads only to the darkness. God is not obligated to send the Spirit again and again and again to your heart. Do not say, “I’ll come to Christ later. I’ll live for him after I graduate, after I go to college, after I have some fun, after I get married. I’ll be a Christian someday when I have finally settled down.” Do not say, “I know I need to get serious about the Lord but I just want to have fun first.” Now is the right time to come to Christ. Now is the best day you’ll ever have to give your heart to the Lord. Now is the perfect moment to get serious about following Jesus. Behold, now is the day of salvation!

Forgive me, Lord, for putting off my obedience to your call. Shine, Jesus, shine, and please start in my heart. Amen.