Good News for the Fallen

Good News for the Fallen 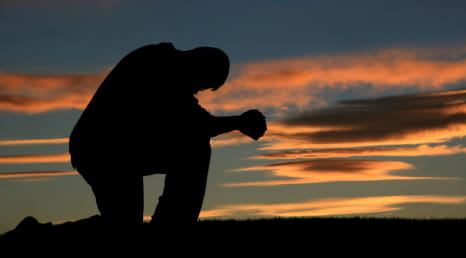 “Simon, Simon, Satan has asked to sift you as wheat. But I have prayed for you, Simon, that your faith may not fail. And when you have turned back, strengthen your brothers” (Luke 22:31-32).

I don’t think Peter understood what Jesus was saying.

A sense of timing may help us here. Let’s suppose Jesus said these words in the Upper Room about 10 PM. At that moment Peter had no idea what was about to hit him. He didn’t know about Gethsemane, the Judas kiss, the arrest, and the trial before Caiaphas. Most of all, he had no idea that he was about to deny Christ three times.

I notice two encouraging facts about the way Jesus treated Peter: 1) He never criticized him and, 2) He never gave up on him. Jesus knew about Peter’s denial long before it happened. He knew what Peter would do, he knew how he would react, and he knew the kind of man Peter would be afterward. That’s why he said, “When you have turned back.” Not if ... but when! He knew that Peter’s heart was good, and he knew after his terrible sin he would return to the Lord. Isn’t that wonderful? Jesus has more faith in Peter than Peter has in Jesus. He knew that Peter had important work to do - “Strengthen your brothers” - but it couldn’t happen without his fall and his restoration to the Lord. It had to happen that way or else Peter would never be fully effective for Christ.

The same thing is true of our failures. God can touch our broken places and make us stronger than we were before. Though we fall and fall and fall, and though our faces are covered with the muck and grime of bitter defeat, by God’s grace we can rise from the field of defeat to march on to new victory.

That’s what happened to Peter. His guilt was turned into grace; his shame into sympathy; his failure into faithfulness.

Here is the proof: Peter did much more for Jesus Christ after his fall than he did before. Before his fall, he was loud, boisterous and unreliable; afterward he became a flaming preacher of the gospel. Before, he was a big talker; afterward, he talked only of what Jesus Christ could do for others. He was the same man, but he was different. He was still Peter through and through, but he had been sifted by Satan, and in the sifting the chaff of his life had been blown away.

Peter still speaks to us today: “If you think you’ve fallen short, if you feel like you’ve denied him, look at what happened to me.” Do not despair. God still loves you. If God can forgive Peter, he can forgive anybody. He loves you, He always has, and He always will.

Take heart and believe the good news. If he did it for Peter, he can do it for you.

Heavenly Father, we thank you that the blood of Jesus is enough for our past, our present, and our future. When we fall, you pick us up because you are the God of second chances. Amen.