Korazin: Knowing Too Much and Believing Too Little

Korazin: Knowing Too Much and Believing Too Little 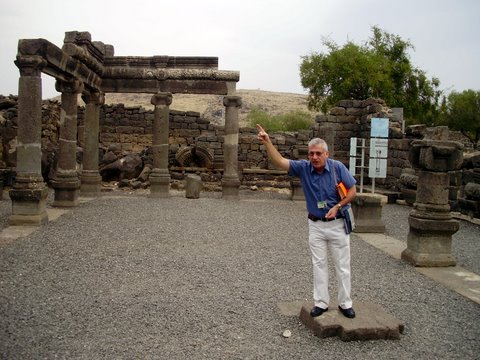 It was only ten days ago, though it seems much longer, that we awoke on the shores of the Sea of Galilee. By "we" I mean the 15 people who joined our tour group on a pilgrimage to the land of the Bible. On this particular day we started by taking a boat ride on the Sea of Galilee and then saw the "Jesus boat" that may have been used by our Lord and his disciples. Later we would head north through the "finger" of Galilee to Dan and ultimately on to Caesarea Philippi, site of Peter's Great Confession (Matthew 16:13-16),  and then along the Golan Heights to the eastern shore of the Sea of Galilee, to the spot called Kursi or Gergasa where Christ cast out the "legion" of demons from the man who wandered among the tombs. He sent the demons into a herd of swine who then rushed down a steep bank and drowned in the Sea of Galilee (Mark 5:1-20).

All in all, a very busy day.

After we left the "Jesus boat" and headed north, Malcolm Cartier (our tour guide) told us he had a site he wanted us to see. As we drove through the hills just north of the Sea of Galilee, we rounded a curve and there before were the remains of what once had been a vibrant, vital first-century city called Korazin.

Located north of Capernaum and just north of the Mount of the Beatitudes, it was an excellent location for a town. Close to the water, but not too close. Built in the hills so the weather was moderate.

You may have seen Korazin spelled Khorazin or Chorazin, but they all refer to the same place. We know the location because Eusebius describes it for us.

When we got off the bus, Malcolm took us on a brief tour, showing us the homes built around an ancient, well-preserved synagogue dating from the 4th century. The homes were built of the dark basalt rock native to the area. Like many biblical sites in Galilee, Korazin is off by itself, away from urban sprawl so when you see the remains that have been excavated, you are stepping back in history twenty centuries.

Korazin was part of the "Orthodox triangle" in Jesus' day. The other two parts of the triangle were the nearby towns of Bethsaida (home to Peter, Andrew and Philip) and Capernaum. Those three towns were filled with devout Jews who took the Law seriously. Malcolm spent quite a bit of time showing us the well-preserved remains of the 4th-century synagogue whose ascending steps were built after the design of Herod's Temple in Jerusalem. You could easily tell that for the residents of Korazin, religion stood at the center of community life. In fact, the layout of the town placed the synagogue in a prime location. The synagogue contains a "Moses seat" for the men who read from the Torah.

Archaeologists have uncovered many homes in Korazin, several public buildings, and an olive oil press. Malcolm took time to show us the home of what must have a wealthy family. We stood inside the stone walls and wondered who had lived there in Jesus' day.

The thought struck me that Korazin must have been a pleasant place to live in the first century. Certainly the ruins suggested that quite a few wealthy people lived there. In the lower section of the town (not all of it has been excavated), you could see more modest homes. No doubt the weather here was agreeable, you could get fish from the nearby Sea of Galilee, and you could travel west to Nazareth or around the lake to Tiberius, and for the appointed feasts, you could easily make your way along good roads to Jerusalem.

All in all, Korazin was a fine place to live. Not too large, not too small. Prosperous enough, good location, close to everything that mattered. And the people tended to be observant Jews who wanted to obey the Law of God.