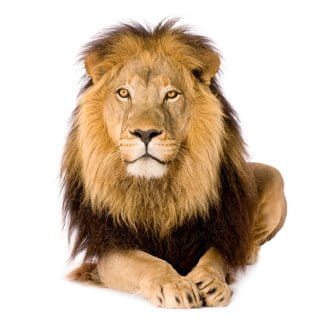 When he wanted to symbolize Jesus in the Chronicles of Narnia, Lewis created Aslan the lion. And not just any lion. He’s the King of Beasts and the real ruler of Narnia. Mostly unseen because he is always on the move, Aslan is powerful and yet kind, gentle but fierce. He is to be feared and revered and honored and trusted.

In one of the most famous bits of conversation in the whole series, Lucy asks the beavers, “Is he safe?” “If there’s anyone who can appear before Aslan without their knees knocking,” Mrs. Beaver replies, “they’re either braver than most or else just silly.”

That’s the whole point of this image. Lions aren’t safe, but it matters greatly whether or not they are good. Satan himself is called a “roaring lion” who prowls the earth looking for someone to devour (1 Peter 5:8). He’s not safe and he’s definitely not good.

But Jesus is good and that changes everything.

He came from the tribe of Judah just as Jacob had predicted almost two thousand years earlier (Genesis 49:10). In his first coming he arrived as a helpless baby in the manger. But before long he confounded his teachers, baffled his parents, enraged the power brokers, challenged the hypocrites, and at the same time he welcomed little children, touched the lepers, healed the sick, cast out demons, calmed the storms, cured the blind, and he even raised the dead. As he was dying, he uttered words of forgiveness for his murderers. The Bible sums up his life by saying he “went around doing good” (Acts 10:38).

The Lamb who died is the Lion who prevailed over death.

But that is not the end of the story.

He came the first time as the Lamb of God.
He will come again as the Lion of the Tribe of Judah.

He is the Lamb who is a Lion, the compassionate Savior who will one day rule the world.

Let us learn from this what it means to follow Jesus. Put on the meekness of the Lamb and you will have the strength of the Lion.  Follow the Lamb and the Lion will protect you from all your foes.

Lord Jesus, may we be meek today so that your mighty strength may flow through us. Amen.