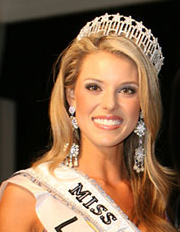 By now the whole inhabited world, by which I mean those who watch TV and follow the Internet, knows about Carrie Prejean who almost became Miss USA the other night but ended up in second place presumably because of how she answered a question from a strange fellow named Perez Hilton about gay marriage. Although Miss Prejean’s answer was not a model of clarity (pageant answers generally being of the “I favor world peace” variety), she was clear enough in defending the traditional view of marriage as being one man and one woman.

Last night I watched her interview with Sean Hannity. Miss Prejean comes across as a sincere 21-year-old who decided that it was better to be true to her faith even if it meant losing the Miss USA crown. Well, good for her. We need Christians who will not sell out their convictions or mumble a bunch of politically correct nonsense.

She is, by the way, a student at San Diego Christian College, formerly Christian Heritage College, founded by (among others) Tim LaHaye and the late Henry Morris.

A few quick notes about the controversy . . .

1. If you watch the video carefully, you can hear loud clapping when she gave her answer. That reinforces the notion that many people do not support gay marriage. Even in liberal California, Proposition 8 won last November.

2. We shouldn’t be surprised that Miss Prejean has been pilloried by the mainstream media. Anyone who dares to speak out in favor of traditional values will run the same gauntlet.

3. Nevertheless by keeping her cool under enormous pressure, she gains support from millions of people. And if she had caved and given some mumbo-jumbo answer, she might have won the pageant and would have disappeared from the cultural radar. Better in this case to speak your convictions firmly and politely and leave the results in God’s hands.

5. When asked about controversial matters, we would all do well to take the “Joe Friday” approach: “Just the facts, Ma’am.” Brief is better. Just say what you believe, don’t make a big deal about it, and don’t try to explain it or nuance it. Short and simple with a smile wins the day.

6. Ironically, Miss Prejean won by losing. That often happens when we respond to provocation with grace under pressure.

One final point, which I hesitate to mention because it injects an unhappy note into the proceedings. Nearly all the news reports show the video of Miss Prejean in an extremely skimpy white bikini that all the pageant contestants were required to wear. It looked like sexy underwear, which is how it was supposed to look.

I guess by now we’re all supposed to be used to this sort of thing and think nothing of it. But still it bothered me. I wouldn’t want my daughters parading in public dressed like that. Hmmm. I sound like those old-time preachers, don’t I? But I think they were more right than wrong about stuff like this.

While that part doesn’t help the cause, I am happy to commend Miss Prejean for sticking up for what she believes. By speaking out in favor of traditional marriage, she took a strong stand in favor of the truth, and for that she deserves our applause.