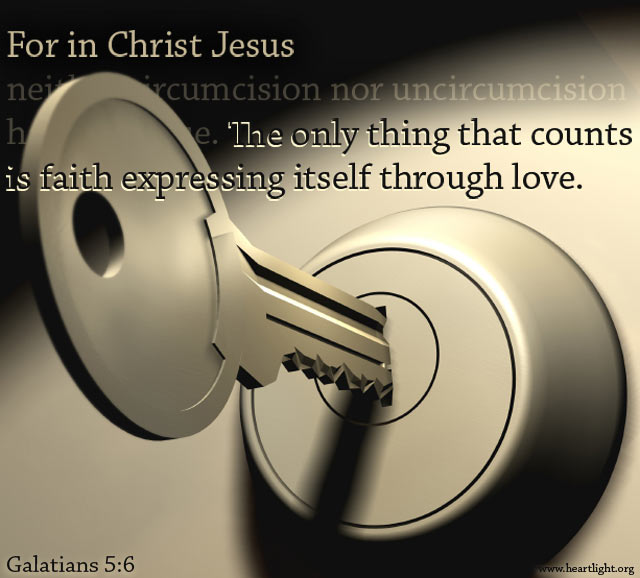 Last week I traveled north to teach the book of Galatians to 350 very attentive students at Word of Life Bible Institute in Pottersville, New York. Even though Galatians is amazingly contemporary, I face a huge challenge in making it seem relevant today because the major issue in the book deals with something we hardly ever talk about in church.

As always, a wave of nervous laughter swept across the room when I brought up the subject. You can't skip it because circumcision was the reason Paul wrote the letter in the first place. Some false teachers had come to the young Galatian believers telling them they needed to circumcised in order to be saved, a heresy Paul rightly saw as an attack on the gospel of grace. That's why he penned this short, sharp, emotional, highly personal and very direct letter to the Galatians.

Rarely if ever will we face this exact problem. What was a huge issue in the 1st century is no issue at all for us today.

So the problem for me becomes, How do I explain the circumcision controversy to 21st-century college-age students? In my third lecture I announced that I was going to give them "Pastor Ray's Circumcision Talk." Stepping away from the lectern, I sat on the edge of the stage, let my feet dangle, and had a frank talk with the students. I told them that circumcision was the God-ordained sign of the covenant for Jewish men. It meant they were part of God's covenant family and were under obligation to keep the law of God. Circumcision was the door that opened into everything else—the priesthood, the sacrifices, temple worship, everything.

But then I asked, why did God choose this particular sign? After all, it was so personal and private that no one else but a man (and his wife) would ever see it. From the outside, you couldn't tell who was circumcised and who wasn't. Why didn't God choose some other mark on the body? Why not piercing the ear or cutting the cheek or marking the hand? Something that could be easily seen. Why choose something so private and personal?

At this point the normal rustling in the room stopped. No one moved. I told them that God chose this mark so that in the most intimate moments of life, the man would remember that he belonged to God. And if he decided to sin with a foreign woman, he would have to do it with that part of his body that had been set apart as holy to the Lord. Circumcision reminded a man in a way that he could never forget that he belonged to God—body, soul and spirit—and that even the most intimate moments, the things never seen by others, the part that goes on behind closed doors, that part must belong to God also.

Purity matters because all of life matters to God. In truth, nothing is private with the Lord. He sees it all, even the things we try to hide from him. There is no use in talking about outward purity unless we also talk about inward purity, which the New Testament describes as the circumcision of the heart. Circumcision still matters to God, only now it's not the physical procedure, it's the state of your heart that God cares about.