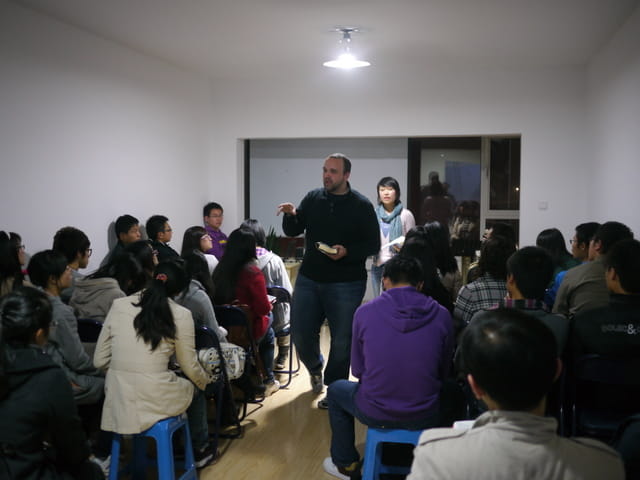 Mark speaks to the students in Dalian, China.

Last Saturday night my son Mark and I spent our first evening in Dalian, China. I’m not sure exactly where we were in Dalian because it was late and Chinese cities are a forest of skyscrapers. Pastor Peter led us to a building where we took the elevator to an upper floor and entered an apartment where a house church meets. There were about 40 university students there, all in their early 20s. Sharp group. We met with them from 6-9 PM. They started the meeting by singing fervently for 30 minutes or so. I think I recognized one song. When my time came to speak, I wasn’t sure which way to go. Two weeks earlier the students had submitted questions relating to suffering and the Christian faith. I had two sermons in mind and when I got up, I didn’t preach either of them. I ended up talking for an hour about “What’s gone wrong with the world and what God plans to do about it.” To introduce the topic, I talked about the recent death of Steve Jobs, whose name all the students recognized. When I was finished, the students clapped and we had a 15-minute break for refreshments. Then Pastor Peter tapped Mark on the shoulder and said, “You’re next.”

He grabbed his Bible and got up to speak. As far as I know, he’s never spoken through a translator before. At the beginning he was giving Stream (the English name for our translator) two-word segments that were too short to translate effectively. Once he worked that out, he was rolling. He did 30 minutes on 1 Peter 5:6-12, a section he taught at Word of Life Bible Institute in Korea on Friday morning. But this time he had no notes. He knocked it out of the park. Really did great.

After another worship song, the leader said, “The speakers will now take questions.” So from 8:15-9 PM Mark and I (and the translator) stood in front of the students answering questions, most of them about how to deal with times of discouragement, pressure, and what to do when you find yourself going through a “spiritual valley.” I think these young Chinese students are under enormous pressure to get an education, get a job, get married, and get going in life. Plus it’s difficult to be a Christian in a materialistic, irreligious society. Sometimes the students were serious, but often there was a lot of laughter. Occasionally they answered each other.

The students clapped and cheered when we were done. Then we went out into the evening chill and into the cacophony of life in Dalian. The students seemed genuinely glad we had come, and we felt very much the same.