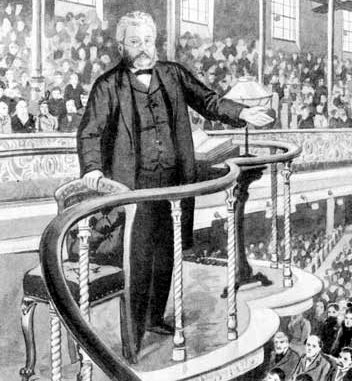 This morning I happened to pick up my well-worn copy of Spurgeon’s Lectures to My Students, a book I have read and re-read over the years. It remains in the top handful of most useful books on the ministry I have ever read. And by chance (or I should say, by providence) I opened the book and read again Spurgeon’s famous chapter called The Minister’s Fainting Fits. Somewhere I remember Warren Wiersbe saying that every pastor should read this chapter at least once a year. It’s that’s good.

Among its many virtues, this chapter combines biblical realism with deep pastoral sensitivity. It is well-known (because he often talked about it) that Spurgeon suffered from prolonged attacks of depression, sometimes so great that he had to leave his pastorate in London to escape to a resting place in France. As he grew older, his physical problems increased (he became a massive man and often suffered from gout and other disorders) and so did his despondency.

And yet he soldiered on, pastoring the Metropolitan Tabernacle, leading the Pastors’ College, publishing sermons, preaching to thousands, and living in the storm center of theological controversy.

In his chapter Spurgeon points that ministers struggle with depression for many reasons:

1. They are men and subject to all human frailties.
2. They all struggle with physical weakness to one degree or another.
3. The work of the ministry itself is exhausting.
4. They tend to be somewhat isolated from others.
5. Their work is sedentary in nature.

Then he mentions the times when ministers often face bouts of depression:

1. After a great success.
2. Before some great achievement.
3. During a stretch of long, unbroken labor.
4. After a crushing personal blow.
5. When troubles multiply.
6. For no specifiable reason.

Here are a few quotes to stir your thinking:

If it be enquired why the Valley of the Shadow of Death must so often be traversed by the servants of King Jesus, the answer is not far to find. All this is promotive of the Lord’s mode of working, which is summed up in these words—"Not by might nor by power, but by my Spirit, saith the Lord.”

To hide pride from the worker is the great difficulty. Uninterrupted success and unfading joy in it would be more than our weak heads could bear.

My witness is, that those who are honoured of their Lord in public, have usually to endure a secret chastening, or to carry a peculiar cross, lest by any means they exalt themselves, and fall into the snare of the devil.

I find it striking that Spurgeon offers no easy way out. The chapter is all diagnosis and very little about treatment and even less about prevention. That must be left for other writers. Perhaps Spurgeon thought from his own experience that there is no way around these bouts of depression or “fainting fits.” Consider this from his final paragraph:

The lesson of wisdom is, be not dismayed by soul-trouble. Count it no strange thing, but a part of ordinary ministerial experience.

I am sure he is right about that. And I am sure that Wiersbe is right also that every pastor should read this chapter at least once a year.

Just before he ends, Spurgeon offers this wise counsel:

Serve God with all your might while the candle is burning, and then when it goes out for a season, you will have the less to regret. Be content to be nothing, for that is what you are. When your own emptiness is painfully forced upon your consciousness, chide yourself that you ever dreamed of being full, except in the Lord.

Then he ends his lecture with this strong exhortation:

Come fair or come foul, the pulpit is our watch-tower, and the ministry our warfare; be it ours, when we cannot see the face of our God, to trust under the shadow of his wings.

Spurgeon was right about this and about so many other things as well. Modern-day ministers ought to heed the “Prince of Preachers” so that when we enter the Valley of the Shadow, we can know that we aren’t the first ones to go there and that by God’s grace we won’t be there forever.


You can reach the author at ray@keepbelieving.com. Click here to sign up for the free weekly email sermon.