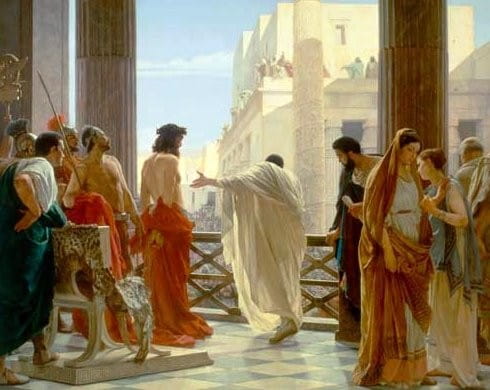 Sometimes a question tells you all you need to know. With those three words Pontius Pilate revealed his own vacillating nature. Although he knows Jesus is innocent of any crime under Roman law, he dare not appear weak in the eyes of the Jewish leaders.

When Jesus said, “Everyone on the side of truth listens to me” (v. 37), Pilate replied, “What is truth?” No one knows exactly what he meant. Was his question a wistful desire to know the truth? Was it philosophical cynicism? Was it a mocking joke or simply pure ignorance? Was he irritated or indifferent? Was he speaking from a deep need within? There is no way to know with certainty why Pilate asked that question.

We should not overlook the fact that the Apostles’ Creed singles him out by saying that Jesus “suffered under Pontius Pilate.” Why not Caiaphas or Herod or Judas or the Roman soldiers or the howling mob? The answer comes from a scene Mel Gibson captured with great power in The Passion of the Christ. Jesus has just been scourged. He stands before Pilate, covered with blood, his flesh in tatters, his eyes nearly swollen shut, his face so marred that he barely looks human. Pilate looks at him in shock and pity and in a near-whisper says, “Don’t you know I have the power to put to you to death or to free you?” (John 19:10) That wasn’t a boast. it was a statement of sober fact. As the Roman governor of Judea, he alone could condemn a man to death. If it is true that many of the Jewish leaders wanted Jesus dead, it’s also true that they could do nothing without Pilate’s permission. In the end, he must be held accountable for the death of Jesus. If the Jewish leaders loaded the gun, it was Pilate who pulled the trigger.

In the film and in the gospels, Pilate comes across as a man who knows that Jesus is innocent yet lacks the courage to set him free. Three times he says, “I find him not guilty” (John 18:38; 19:4, 6 NLT). Pilate knew Jesus had committed no crime worthy of death. But like many a politician caught between a rock and a hard place, he caved in to pressure from the Jewish leaders who wanted Jesus dead. That’s why I was so taken by the depiction of Pilate and Jesus, and Pilate and his wife in the movie. You probably know that all the dialogue is spoken in either Aramaic or Latin. When Pilate asks his famous question, “What is truth?” you hear him say the Latin word for truth: veritas. Before his final decision, he confers privately with his wife Claudia. Although this scene is not biblical, it is entirely believable. What Jesus said about listening to the truth haunts him. “Do you recognize the truth when you hear it, Claudia?” he asks. Veritas, he says, do you recognize veritas when you hear it? Claudia says that she does. And with a look of love and sorrow, she tells Pilate that since he can’t hear it, he will never know veritas. Not even when the Truth stands in front of him.

Pilate tried to wash his hands but the stain remains. To say, “I don’t want to decide” means “I lack the courage to choose." Not to decide is to decide. No one can remain neutral about Jesus.

Father God, give us eyes to see and ears to hear the truth about Jesus. Open our hearts by your Spirit so that we may take our stand with him. Amen.

What do you think Pilate meant when he asked, “What is truth?” Why does Pilate hold special responsibility for the death of Jesus? Why is neutrality impossible when we consider the claims of Christ? Pray for courage to take your stand for Christ today.