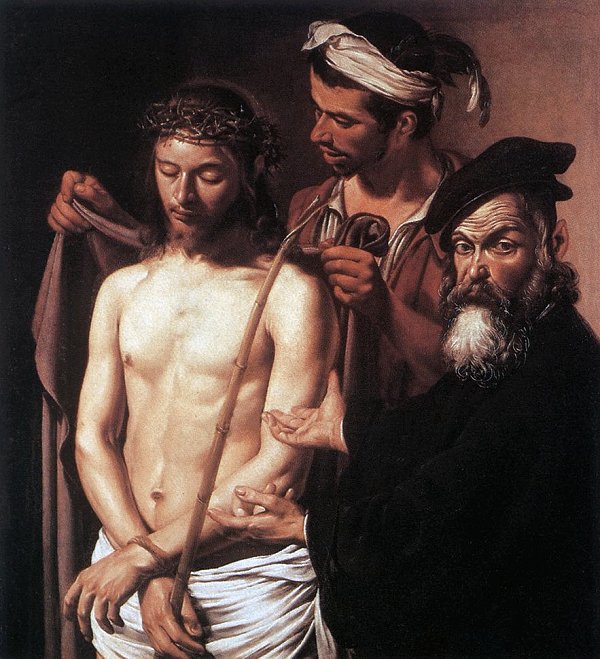 Pilate had a big problem.

He knew Jesus was not guilty of any crime (he said so three times), but the shouting mob wanted him dead. So Pilate offered them a choice.

Barabbas or Jesus.
The criminal or the innocent man.
The terrorist or the King of the Jews.
The troublemaker or the Prince of Peace.

"Barabbas," they cried. "We want Barabbas."

And then the great question of the ages: "What I do, then, with Jesus?"
It was a coward's question.

Pilate had no business asking the crowd, and even in asking, he knew already what they would say. To call it dereliction of duty would be kind. This was a sell-out of monumental proportions. The Romans made Pilate governor precisely so he would make the tough calls. We can imagine how the argument played out in his mind:

"Don't be a fool. You already know he's innocent. You said so yourself. Let him go."
"Give him to the Jews. Let them deal with him."
"I've never met anyone like this man Jesus."
"Stop thinking. Just do it. Hand him over to his own people."
"If I do, they will crucify an innocent man."
"So what? It's not your problem."

Today is April 1. That means it is April Fool's Day. An apt day to consider this question because no man was ever a greater fool than Pilate. He knew Jesus was innocent but he didn't have the courage to set him free.

There comes a time when we all have to "man up" and do the right thing. Rarely will it be easy or convenient or popular. But it is in those moments that we find out-and the world finds out-what we're made of.

In 1891 A. B. Simpson took this question and turned it into a song  called What Will You Do With Jesus? that was widely used in evangelistic campaigns. Here are the first two verses and the refrain:

Jesus is standing in Pilate's hall,
friendless, forsaken, betrayed by all;
hearken! what meaneth the sudden call?
What will you do with Jesus?

Refrain:
What will you do with Jesus?
Neutral you cannot be;
Some day your heart will be asking,
"What will he do with me?"

After 2000 years when we think of Pilate, we remember one thing. When he had a chance, he gave the wrong answer to the world's most important question. On this Thursday, the day before our Lord's crucifixion, may I press the question on your heart. What will you do with Jesus?

May God give you grace to say, "Jesus, I give you my heart today!"

My Savior, long years ago a man who knew better condemned you to death. I do not want to make the same mistake. With all that I am and all that I have, I give you my heart today. Amen.