When Not to Eat Lunch

When Not to Eat Lunch 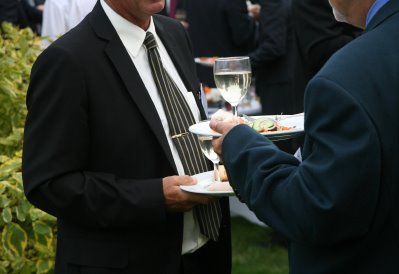 I was asked recently about Paul's statement in 1 Corinthians 5:9-11 that there are times when we should not even eat with a sinning believer:

I have written you in my letter not to associate with sexually immoral people—not at all meaning the people of this world who are immoral, or the greedy and swindlers, or idolaters. In that case you would have to leave this world. But now I am writing you that you must not associate with anyone who calls himself a brother but is sexually immoral or greedy, an idolater or a slanderer, a drunkard or a swindler. With such a man do not even eat.

A friend asked if this isn't being "judgmental" in the bad sense of the word. The answer is, it could be. Certainly the brother who is sinning is likely to regard it that way. These are truly tough words from the Lord. It helps to remember the context. The Corinthian church had been harboring (and even boasting about!) a man in the congregation who was having sexual relations with his father's wife (presumably his step-mother). In some bizarre notion of grace, the church had not only winked at this man's immorality, it had gloried in it, as if to say, "See how broadminded we are. God's grace is so large that we can welcome this man into our midst even while he continues in flagrant sin."

Consider these other facts . . .

1. The man called himself a Christian while continuing in his perverted way of life.
2. The church knew all about the sin and did nothing about it.
3. The church extended Christian fellowship to the man.

And presumably anyone outside of the church who knew the man would have known that the church chose to overlook his flagrant sin.

What should the church have done instead? They should have put the man out of the congregation, excommunicated him, practiced church discipline (v. 2). They should have handed the man over to Satan (v. 5) by putting him out of the church and thus put him back into Satan's realm for the chastising judgment of the Lord in the hope that he would come to repentance.

In the meantime the believers should not "associate" with such a man or even "eat with him." This touches a fundamental issue. How do we feel about sin in our congregation? More to the point, how do we feel when we see our friends getting divorced for unbiblical reasons or when we see our friends involved in sexual immorality or idolatry? We can easily erect elaborate rationalizations for doing nothing, especially when the people involved are friends or family members. It's much easier to look the other way, to hope that they'll stop on their own (they rarely do), and to hope that someone else will step in and do what we ought to do ourselves.

The precise application of these words depends on the situation, and it requires wisdom, discretion, and the help of the Holy Spirit. But it means at least this much. When a believer persists in flagrant sin, we must not pretend that everything is okay because it's not. It's one thing to have a lunch with a person with the express purpose of trying to win them back to the Lord. It's another thing to have lunch together, to laugh and talk about old times and talk about football or how our kids are doing, and then leave without ever bringing up the "elephant in the room."

Sinning believers need to know that it can't be "business as usual" as long as they continue in their sin. And it means that we won't pray with them or share the Lord's Supper with them as if nothing has changed. Remember, the man in Corinth chose to sleep with his father's wife. As long as he continues in that immorality, life can never be the same. We shouldn't pat him on the back and act as if he's doing fine because he's not.

Will he be hurt by our lack of overt friendliness? Probably.
Will he feel like we're picking on him? Maybe.
Will he get angry at us? He might.
Will it end our friendship forever? It might.

But some things matter more than others. The church isn't a social club where we have freedom to live any way we like and then have the rest of us say, "That's okay. God loves you and we won't mention your sin." If we really love people, we may have to do the hard thing and stop eating together.

Better to have our friends angry for a while so that we might be together eternally.

Hard as it may be to put this into practice, there are times when we shouldn't invite our friends over to watch football and pretend things are okay when they aren't. And we shouldn't eat lunch with them if we're going to leave the impression that their sin doesn't matter.

That's why not eating with someone we love may actually be the kindest thing we can do for them.