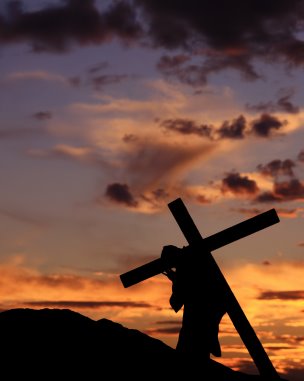 Before you answer that question, let me set the scene. It's a few minutes past noon in downtown New York City. You've walking with a few friends to a favorite lunch spot when a camera crew stops you for a spontaneous interview. To your surprise, their questions have nothing to do with the White House, politics, the economy, or where you stand on health care reform. The interviewer wants to know what you think about Jesus Christ. Who is he?

Which answer will you give?  Before you answer, let me say that you can find people today who will give every one of those answers. Does that surprise you? It's shouldn't. After two thousand years, we still wonder about the man called Jesus.

But it's nothing new. When Jesus asked his disciples, "Who do people say I am?," they replied with four different answers (see Matthew 16:13-16). Even when he walked on this earth, people were confused as to his true identity. Some thought he was a prophet, others a great political leader, still others thought he was John the Baptist come back to life.

Who is Jesus Christ? And why do we believe in him? As we begin our search for the answers, let's start by surveying some of the modern versions of Jesus.

We start with this view because it is no doubt the most popular "face" of Jesus. Ask any ten non-religious people on the street who Jesus is and eight of them will say something like, "He was a good man who lived a long time ago." People who say such things do not pretend to be Bible scholars in any sense of the word nor do they mean to be offensive. They simply are reflecting the common wisdom most of us learned as children: When in doubt, say something nice.

Of all the modern versions of Christ, this one is both the closest to the truth and the deadliest error. Jesus was a good man. Acts 10:38 even says, "He went around doing good," referring to his miracles. But to stop there is to miss the central truth of his divine personality. He was a good man-yes! But only because he was also the Son of God from heaven who came to be the Savior of the world.

People who hold this view see Jesus as a talented Jewish teacher who never meant to start a new religion. They see him as a first-century Martin Luther who wanted to reform Judaism, but ended up being crucified for his efforts. Moreover, they don't believe he rose from the dead, but that his disciples believed he was present with them after his death so the legend of the resurrection arose in order to keep the dream alive.

This view was very popular in the '60s when left-wing radicals appropriated Jesus as the Messiah who came to overthrow the unjust power structures of his day and to bring in the kingdom through protest and non-violent action. Some theologians even used the image of the Revolutionary Jesus to support the establishment of Marxist governments around the world.

This is the option for people who like Jesus but don't want to worship him exclusively. They lump him together with other notable religious leaders, such as Moses, Confucius, Gandhi, Buddha and Mohammed. Such people have a Mt. Rushmore religion. When they look up, they see four or five faces peering down from heaven. Jesus is one of the faces they see. Pick the one you like and worship him. Many people believe in the Ecumenical Christ because it's a convenient way to call yourself a Christian and still be open-minded about other options.

After surveying the various answers of modern man, we are still left with the great question of history, "Who is Jesus Christ?" If those answers are wrong, what is the right answer and how can we be sure?

In order to answer that question, we have to go back to the New Testament because it is the only reliable source of information about Jesus Christ. It's true that we do have some information about Jesus in extra-biblical sources from the first century, but it is limited and scattered. The only way to get an accurate picture of Jesus is to study the record of his life found in the four gospels. When we do, five important facts emerge that form the answer to history's greatest question.

You can rest the rest of the message online.