Why Do You Look For The Living Among The Dead?

Why Do You Look For The Living Among The Dead? 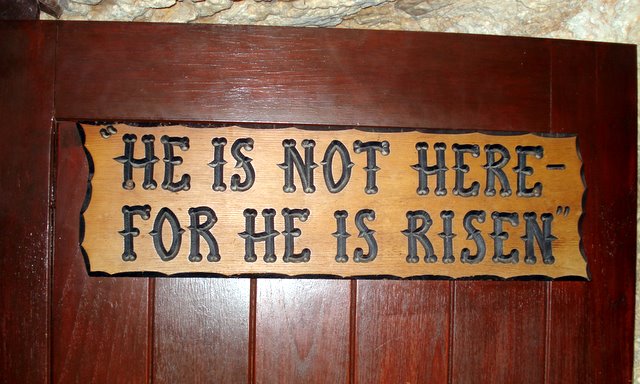 Last October we visited the Holy Land for the fifth time. We ended our last day of touring in Jerusalem by going to the Garden Tomb, the spot believed by many to be the actual burial place of Jesus. It is located next to Gordon's Calvary, that strange rock outcropping that appears to be worn into the shape of a skull. In Jesus' day we know it was used as a burial site. Many believe it was the spot of the crucifixion.

The Garden Tomb is located about 100 yards from Gordon's Calvary and is in fact the spot of a beautiful garden built over an ancient Roman aqueduct. To your left as you enter is a typical first-century tomb dug into the hillside. A trench in front of the opening was apparently designed for the massive stone that once covered the entrance.

Because the opening is very small, I had to duck to go inside. For a few seconds, you see nothing until your eyes adjust to the darkness. Then you can easily make out the two chambers. Visitors stand in the mourners chamber. A wrought-iron fence protects the chamber where the body was laid. You soon notice that the burial chamber was originally designed for two bodies. However one ledge was never finished for some reason. The other one was. It appears to be designed for a person slightly less than six feet tall.

As I looked around the burial chamber, I could see faint markings left by Christian pilgrims from earlier centuries. After a few seconds another thought enters the mind. There is no body to be found in this tomb. Whoever was buried there evidently left a long time ago. The Garden Tomb is empty!

As you exit back into the sunlight, your eyes fasten upon a wooden sign: "Why seek ye the living among the dead? He is not here, for he is risen, as he said."

On this Easter morning I am happy to declare those ancient words once again. The empty tomb really is empty because Jesus Christ really did rise from the dead.

Let the people of God rejoice. "He is risen! He is risen indeed."

Living Lord Jesus, be born anew in our hearts today. Lead us to the empty tomb. May we hear the angel's voice declare, "He is not here, for he is risen, as he said." Let faith rise to banish our fears. May those who doubt, doubt no more. May Easter joy fill our hearts today. Through him and to him who is the resurrection and the life, even Jesus Christ our Lord, Amen.