It Takes Guts to Walk Away From a Fight

It Takes Guts to Walk Away From a Fight

Have you been following the controversy surrounding homosexual-rights advocate and writer Dan Savage and remarks he made at the National High School Journalism Convention this past April?

The address was billed as an anti-bullying talk but quickly digressed into a series of highly critical comments decrying orthodox Christianity. After Mr. Savage used a vulgarity to describe the Bible, approximately 100 students made their exit in protest. However, this quiet response raised the ire of the columnist, who then used another vulgarity to criticize the protesters.

Mr. Savage has since apologized for criticizing these students, admitting that his remarks were “insulting” and tantamount to “name-calling.” It's unfortunate that a person tasked with talking about the dangers of bullying students, would, in fact, bully students in his audience.

I’m glad he acknowledged his error, but it should be noted that Mr. Savage has not apologized for mocking the Bible. And curiously, he continues to maintain that his remarks don’t represent an attack on the Christian faith. Instead the columnist suggests he’s criticizing those of us who believe what the Bible states very clearly – that homosexual behavior is a sin and an act contrary to God’s design.

When I heard about this story, I wondered what it must have been like to have been a Christian student sitting in that auditorium that day. If I had been one of those students, would I have had the courage to stand up and walk out? To be candid, I’m not so sure. Back when I was 17, my faith was not fully formed and I was still finding my way. If all my “cool” classmates had stood and cheered in agreement, would I have joined in?

Controversy is everywhere in society today. In fact, it’s what drives television and radio talk shows. Noise makes news. Culture seems to, at least temporarily, reward the soul who shouts the loudest.

But I was thinking about these students who didn’t shout or argue, but simply stood and walked out in protest. It takes guts to stand up for what you believe in and an even a greater measure of moxie to register your objection by simply walking out the door. Anybody can shake a fist or throw a verbal punch, but it takes a quiet confidence to walk away from a fight.

In fact, if you ask me, that’s a sign of remarkable strength. It’s a sign of a Christian who can take with ease what the culture throws their way because they know and believe that Jesus has overcome the world (John 16:33).

Keep up with Focus on the Family on Facebook 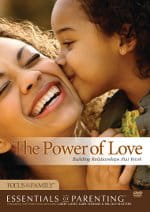