The Mystery of the Disappearing Christmas Carolers

The Mystery of the Disappearing Christmas Carolers 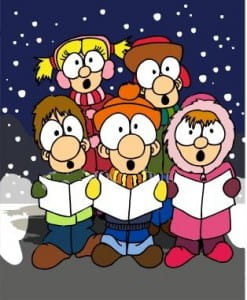 Why does no one Christmas carol anymore? When I was a kid, Christmas always meant a clutch of strolling neighborhood singers stopping outside your house at night to joyfully belt out a holiday tune that always made you feel so good right before you cranked up the TV so you could keep watching Hawaii Five-O.

Ah, carolers. They used to be such a big part of Christmas. We used to get so many caroling groups outside our house that by December 23rd my whole family was capable of enjoying an entire meal in the pitch dark that came from us closing all our curtains and snapping off our lights because it’s not like you can’t hear them coming. But, as everyone knows, carolers are hyena-tenacious. I remember being in awe of carolers’ will-do attitude as they steadfastly stood outside our house, singing their hearts out with a raucous gusto that at once communicated “Merry Christmas! Happy New Year!” and “We saw you turn your lights out.”

I used to hope that two or three groups of carolers in our neighborhood would bump into each other, and a vicious caroling turf war would break out. I imagined cups of hot chocolate flying everywhere, people being being beaten with song sheets, mittens and caps sailing through the air.

Me being interviewed on TV.

“I saw the whole thing,” I’d say. “It was horrible. I was innocently standing right here on my lawn with this slingshot, when all of a sudden the happy holiday singing everywhere around me turned into terrifying wails of bloodlust. It was awful. And yet, before I could drag my sister out here in the hopes of someone clocking her with a mug, it was over. Christmas carolers are dangerous menaces to society who must be stopped right after they wang my sister on the head with a coffee mug. So when am I gonna be on TV?”

Good King Winksalot looked out
At the feet of Stephen
Then the snow was all about
Deeply, crispy Steven.
Tightly moans the moon at night
Though it’s not in schoo-ol
Willy Wonka is a fright
Carrying his winner coo-oo-ler

Forget it. Plus, then I always start noticing my fellow carolers giving me the evil eye. Like they know all the lyrics. That’s when I usually start silently mouthing the lyrics, the better to hear them failing. But glaring at your fellow carolers while pretending to sing is only fun for about 10 or 15 songs. Then it’s back to so dramatically rolling my Rs in Little Drummer Boy that I practically choke to death on my tongue.

And I always ended up standing directly in front of that special person who’s in every caroling group: the one who mistook “Let’s go out Christmas caroling!” with “Let’s go audition for the Metropolitan Opera!” You know those people? Who sing like what they’re really doing is drumming up customers for the little hearing aid business they run on the side?

The point is: I sure do miss that great tradition of gathering together with a bunch of people you don’t really know all that well, and then going outside with them into the freezing dark to wander around the streets singing songs in the hopes that eventually someone will feed you.

Still, there’s no denying that it’s also nice not to get randomly jabbed in the arm with a fork while you’re trying to eat in the dark with your family. Always look on the bright side, that’s what I say.