Earth is Not G-Rated

Earth is Not G-Rated 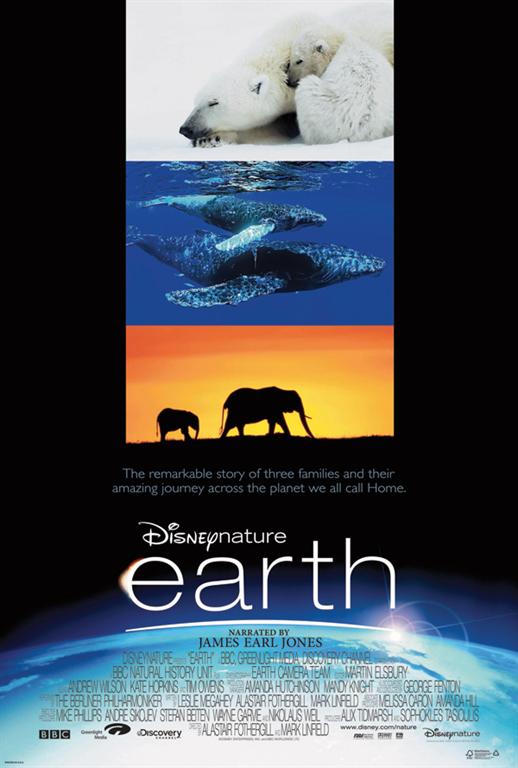 This past Monday night I took my young sons to see a movie seething with implicit sex and violence. No explicit sex scenes were shown, and blood and gore was absent, but the subtext of raw violence and animal sexuality was everywhere. And the film was rated G.

We were, of course, in the theater watching Disney’s release of Earth, a nature documentary with spectacular visuals and a kind of forced narrative about polar bears, elephants, whales, caribou, cranes, and an all-star cast of creatures. Some of the creatures die.

Last week’s Newsweek magazine warned parents that, despite its G rating, Earth could be disturbing to children. There’s no splattered blood, but a baby elephant wanders away from his mother, a pride of lions take down an elephant, and so on. The film shows a slow motion cheetah-caribou chase with the motion slowing further as the predator catches his prey and places his paws around its face. It was reminiscent of the staircase scene in Gone with the Wind, we don’t need to see what happens next to get what happens next.

The Earth producers told Newsweek they tried to defang the most disturbing parts of the film, but, well, that’s the way nature is, red in tooth and claw.

That’s why I, as a Christian, am thrilled to see both sides of the dilemma for Disney. It is human to acknowledge both the beauty and the horror of the reigning natural order. It is is human to cringe in the face of its cruelty and to sit in open-mouthed awe at its glory.

The Scriptures tell us both. The creation is frustrated since the primeval insurrection. Human rule has been overturned, supplanted with a rule by the craftiest of the beasts (Gen. 3:1). Since the dragon is himself a predator (indeed a murderer) he has no interest in exercising benevolent dominion over the beasts. Fallen humanity, reflecting its snake-god, has become animal-like, captive to instinct and appetites. We acknowledge the beasts but only to emulate them and to worship them (Rom. 1).

The Creator, therefore, subjects the creation to a “futility” under which the creation groans “the revealing of the sons of God” (Rom. 8:19). But even this is subjected “in hope” (Rom. 8:20). God gives humanity, after the flood, the flesh of the beasts for food, but he does so by simultaneously putting the “fear of you and the dread of you” (Gen. 9:2) within the instinctual center of the animals. This is to show that animals are not mere fodder for humans, to be harvested simply like grain. The fear of man in animals is to signify that the image-bearer is now, in some sense, a twisted interloper in this order. It also gives the animals, as my fellow Mississippian Jerry Clower might put it, “a sporting chance” in the arena of hunter and hunted.

The sense of sadness at the starvation of an elephant or the mutilation of an antelope is not simply the sentimentality of post-Bambi American culture, although, to be sure, some of it is. We’re supposed to feel a certain kinship with the animals. That’s why the bloody sacrifice of birds and bulls and lambs among our ancestors could correspond with what was to happen at the Place of the Skull.

Being reminded of the wildness of the wild kingdom can be a helpful reminder to followers of Jesus. This universe is not the way its intended to be. It is bloody, violent, and often chaotic. We do not, as the writer of Hebrews tells us, yet see all things under the feet of humanity. But, “we see him who was for a little while was made lower than the angels, namely Jesus, crowned with glory and honor because of the suffering of death” (Heb. 2:9).

Earth is G-rated. Earth is not.