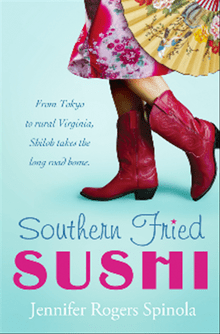 It starts out so well: Shiloh is a young, hot-shot, Associated Press reporter based in Tokyo. She’s an American girl who loves her adopted Far East home, her high-fashion wardrobe, and her hot Argentinean fiancé (pretty much in that order). It’s all great—until it all goes horribly wrong.

When Shiloh’s estranged mother unexpectedly dies, Shiloh is left with bad memories, mixed emotions, and her mom’s house. As one bad decision leads to another, this big-city girl finds herself stuck in small-town Virginia. Fortunately, Shiloh has the help of her mom’s friend Faye, some new friends of her own, and possibly even God . . . though she’s none too sure about him.

Sounds like a fascinating read, doesn’t it? And it could have been fabulous. Unfortunately, instead of taking the next crucial step and creating authentic characters on a believable spiritual journey, the author stops just short and settles for stereotypes.

Here’s a prime example: the Virginia characters are poor but honest, hopelessly unfashionable, dumb but warmhearted rednecks . . . a Southern girl myself, I found their portrayal insulting. Not only that, the author attempts to create their accents through transliteration, which is annoying to read. Not because Southerners don’t sound like that (several of this reviewer’s relatives are living proof that they do), but because the weird spellings get in the way and are “for shore” a constant distraction from what the characters are actually trying to say.

Shiloh herself doesn’t seem as well thought-out as she might be. For a woman with a degree from Cornell—a reporter, no less—she’s remarkably ignorant about the most random things. (One wouldn’t expect her to be familiar with collard greens but even in New York baby sheep are known as “lambs.”) The author also makes the classic rookie mistake of inserting a page-long sermon (do any readers not skip over those?) and later misses no opportunity to preach to her character and, by extension, to the reader. Without all the preachiness, Shiloh’s walk through loss, grief, and self-discovery would have been so much more inviting to go along.

If this all sounds harsh (and it probably does), blame it on disappointment. Jennifer Rogers Spinola is clearly a very talented writer who could do so much better. Her descriptions are fantastic, painting a clear picture of every place Shiloh sees whether it’s downtown Tokyo or her mom’s modest home. The food, too—and there’s a lot of it—is described in mouthwatering detail. The author also deserves credit for making Shiloh’s emotional journey a process rather than a sudden change of heart.

All in all, Southern Fried Sushi hovers on the edge of being a very good book. It’s not bad; it’s just not as good as it could have been. Unfortunately, by taking the easy way out, the author has cheated the reader—and herself—out of an authentic, touching story. This appears to be the beginning of a series; maybe next time around she won’t settle. If that happens, her next book should be terrific.