<< A Wisdom Retreat with Stephen Davey

If we confess our sins, He is faithful and righteous to forgive us our sins and to cleanse us from all unrighteousness. If we say that we have not sinned, we make Him a liar and His word is not in us.

In 1971, a revival came to many churches in Western Canada. It made news in the secular press because of the number of people who journeyed to stores and other businesses to make restitution for their past sins.

Whether it was paying delinquent income tax, admitting dishonesty in business dealings, or going to the border to confess they had lied about goods brought over from the States—hundreds of people were willing to do anything to be fully right with God and man. One author writing about the incident recorded:

When these Christians displayed such a desire for righteousness, the world both admired and hated them. On the one hand, people were thankful that  Christians had the courage to make past wrongs right; but on the other hand they deeply resented such integrity. For in the process of seeing righteousness at work in the lives of others, they saw their own hidden sins exposed.

The Bible describes two very different kinds of Christians: those who claim the name of Christ but refuse to live for Him, and those who not only claim the name of Christ, but live for Him as well. The hypocritical Christian is loved by the world because he gives people all the more reason to castigate the church and call it "that bunch of hypocrites"; it actually makes them feel good about themselves. The distinctive Christian, however, is hated by the world because he exposes the world for what it really is—fallen and sinful.

True Christianity is like the glass of a mirror. Not only do we reflect the glory of God to the world, but we show the world its marred image, exposing all its defects and its attempts to hide the blemishes.

This is why we must confess our sins constantly to God and to others, not only to renew our fellowship with Christ, but to show the world where our true identity lies. Indeed this is one of the greatest witnessing tools that you and I have—to live repentant lives before men.

Will you sin? Yes. Will you struggle at times with sin? Absolutely. Will the world notice it? You bet they will. But then, to their shock, they hear from you an apology . . . confessions . . . attempts to make restitution. In so doing, you declare to the world the message of the gospel: People sin . . . but there is a Savior!

Prayer Point: Ask God to reveal any sin in your life that you are hiding, or may not even recognize.  After confessing it to Him, pray for the strength needed to change. Is there anyone who needs an apology from you? Is there restitution that you should make? Ask the Lord for courage to make amends and set the record straight.

Extra Refreshment: Read Psalms 32—a prayer of repentance and restoration. 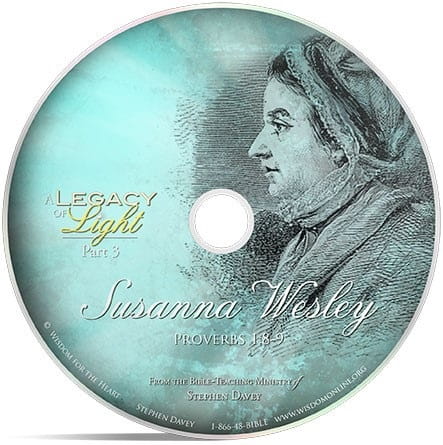 A Legacy of Light: Susanna Wesley

The pervasive public ministry of John and Charles Wesley is a direct result of the private ministry of their self-sacrificing mother, Susanna. Because she considered her home a great mission field, her life is still bearing fruit to this day.

Receive this CD as a thank you for any size donation this month!