Could we change our attitude, we should not only see life differently, but life itself would come to be different. — Katherine Mansfield

I did a chapel for the Milwaukee Brewers a number of years ago. That was a big deal. Where I used to live, the Brewers were the gods of bat, ball, and diamond. Every devout Wisconsinite watched them on TV. Those who could afford tickets would regularly make the pilgrimage to County Stadium to worship in person. But to enter into the locker room? That was the “holy of holies”—the inner sanctuary of the temple where no mere-mortal fan would ever think of gaining access.

But I had an “in”: Paul Molitor. Paul was the captain of the team and because I knew him, I was welcome at the lockers—I was even allowed to speak to the players face to face. I shared with the whole group thoughts from the Bible and they listened… all because of Paul. He elevated me to a different level in the eyes of these amazing athletes. They were willing to listen to me because of my relationship with him.

Here’s a similar situation with God and the Israelites:

Then Moses said to him… “How will anyone know that you are pleased with me and with your people unless you go with us? What else will distinguish me and your people from all the other people on the face of the earth?”  (Exodus 33:16, emphasis mine)

God the Father does the same thing for us. His presence in our lives separates us from others. He distinguishes us. Some may not recognize God as being the source of our uniqueness, but He is. When we become aware of our position as God’s children, we start to project that in our behavior and attitude… we become elevated, changed, unique in the world… and many will be willing to listen to us as we make Him known as a natural extension of that relationship with the Father.

Father, I pray that You would elevate my lifestyle in such a way that I am obviously different from the world. Let me be an example of what life is like in You so that others may know Your awesomeness. Amen 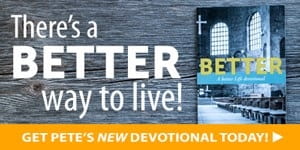